Posted by bigborefan on April 11, 2021
Posted in: Uncategorized. 1 Comment

Under the theme of SCOUTING we’ll consider the following:

Believe it or not… those five questions have immense significance! They could be answered briefly or with much more detail. I’ve chosen the latter approach because to do so briefly usually raises many more issues than initially considered.

Scouting, of course, has application to many more fields of planning and activity than hunting, but I’ll reserve it to that interest.

WHY? Over a seventy year period of “chasing” game (including snares and a BB gun as a pre-teen) I’ve done an immense amount of scouting compared to actually shooting game. The percentage of time invested including all other activities – handloading, testing loads, practising and watching from stands, etc, is likely between 10% to 25% of the total depending on the hunt. That’s no small investment, but those hours aren’t wasted… far from it! In a single moose hunt of 8 to 10 days, at least 50% of hunting time is in scouting! That will not include those who use traditional “stands” waiting for a moose on licence to show up! In such cases most of the hunting hours are in sitting, standing and waiting! The scouting was already done by others in years past. In a case where a pro guide is involved, he has done, or will do, most of the scouting, sometimes with the hunter tagging along. But scouting is/was still involved by someone. 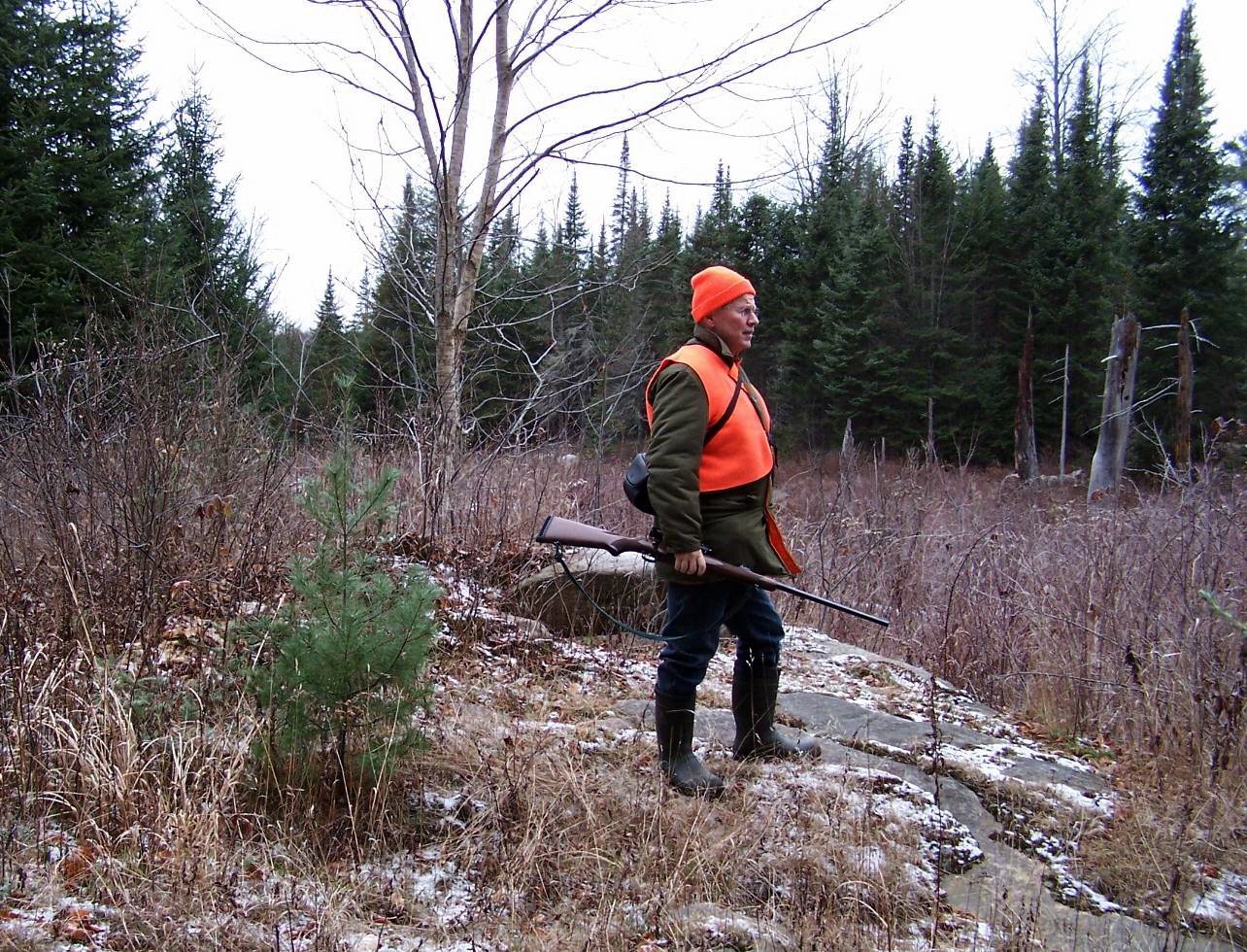 < My primary activity here was scouting.

Assuming you or I are doing the actual scouting prior to a hunt, and not a paid guide or outfitter, we need to know what to look for and what were’re actually seeing and experiencing which answers the question: “WHY?” But what we’re seeing and experiencing isn’t always apparent in its relation to the goal from the get-go. For example: If it’s a new-to-us area there could easily be a lot more information being presented to our senses than we might actually see the importance of in a first go-around of a particular area. Did we pay enough attention to any wet areas or a trickle of water running through a low area that might be hidden in thick undergrowth? The area surrounding it will be soft ground which may reveal the tracks of various fauna. In a puddle on a trail that crossed a significant nearby stream I counted the tracks of eight species of land mammals that were using the same trail I was on — and because the puddle — about 4′ x 6′ — had just recently dried out after a rainfall. The mud with the imprints, at times mingled, was still wet and soft! The tracks of a moose, deer, coyote, wolf, coon, fisher, bear and fox were all accounted for after intense investigation. Those animals had all walked that trail or crossed it over the period it took for that puddle to go dry after the rainfall! One of the joys of my hunting life was to become familiar with various remote trails in the Haliburton Highlands Crown Land before the ATV’ers took them over. I enjoyed the scouting-out of territory prior to “hunting” the same, though technically they are one and the same.

Do you want to know what critters make their living in the area you will be hunting? Do preseason scouting! That’s why!

WHERE? : Any area where you’ll have permission to explore and hunt that will be new to you. Exploration of a new area is the key to scouting. Game trails are evident as well as human trails. Sometimes humans use game trails and/or game use human made trails. When I began hunting bear with an outfitter, Norm, with his permission I followed him around and helped with the baiting procedure during the morning hours. He didn’t check all eighty-five locations each day but did over the course of a week and saw where the activity was “hot”. I was getting a “Master’s” level course in bear hunting, especially in hunting them over bait, by asking questions like: “Why did you choose this site for this bait setup?” Without attempting to give the full course here, he’d point out some key features of the terrain as well as noting bear markings on trees, scat, and the trails they use — difficult for the untrained eye to notice. It could be any game trail OR a distinct bear trail! Usually, if in tight quarters, a bit of careful detective work will reveal black hair snatched by briars or the bark of a tree. Also there will be somewhere along that trail bear markings of a tree. The higher up the claw marks, the deeper, longer and space between claw marks will give excellent evidence that a mature dominant boar bear considers this to be “his” turf! These are not the markings of a bear cub scrambling up a tree to escape a perceived threat… those are quite evident as well, and not difficult to discern from a mature bear. 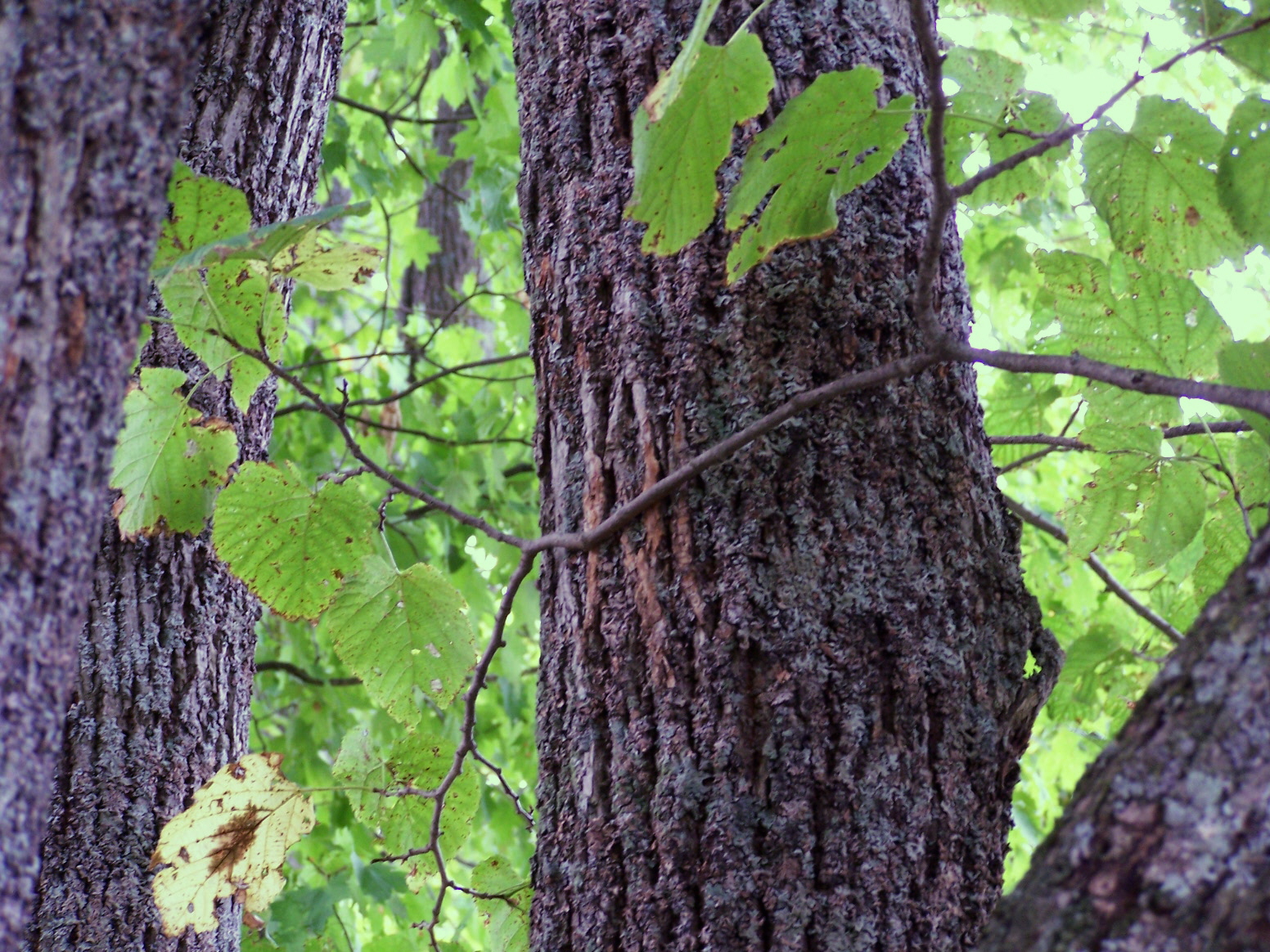 <Do you see the claw marks?

WHAT? : are you looking for, or hoping to discover in your scouting? Is it general or specific? While my main interest, in the example given previously, was firstly bear and secondly moose, yet I also carried small game licences during scouting, but the two seasons didn’t always coincide. But I took note of every possible creature that could be hunted in season in a particular area. I’ve flushed many grouse while scouting for deer, bear or moose. I’ve also had fisher and coon at bear baits, as well as multiple squirrels. But some forests are dead of any wildlife! They may be used as a corridor but nothing living dwells there. It’s good to find that out before wasting time in a non-productive forest or region. Planted pine forests that replace natural harvested mixed growth will usually produce 3 to 6 inches of dead, dry-brown spills — no growth as natural food under those trees! My friend and retired CO laughs when he tells of having a “job” of “reforestation” in planting pine samplings to replace what was a former healthy place for all creatures to find food and shelter.

WHEN? Specifically, any favorable time prior to the hunt. But, as already noted, during any season that allows hunting for specific species we should be alert to other possibilities for predators or small game, as examples, that may require particular seasons and licenses. Some hunters are bird hunters only. Others are small game specific. Whatever the case or season, we should be observant of physical conditions that will vary with the seasons of the year. Our climate is temperate which forecasts four specific seasons per year with more variation during both spring and fall, the usually more active hunting seasons. So I go prepared with potential variable weather conditions in mind. That means I keep in my vehicle both heavier and lighter outerwear — some of which must be for hot and dry or wet and cold during the same hunt… which also applies to foot gear. In a bear blind or stand in the spring or fall, I could be wearing sneakers as footwear or watertight all-weather boots. Changes for both outerwear and footgear have permanent residence in my SUV. Also, ready access to weather updates is a sane policy; I use the radio in my SUV which reports weather, including updates every ten to fifteen minutes.

HOW? Some of the generalities have already been discussed but there are still some practical issues involved.

Making a plan: While pre-season scouting has been emphasized, yet it should be a part of the larger plan for a specific hunt. Consciously or unconsciously we all make either detailed or informal plans for most important activities. Hunting is no exception. Either we rely on others to take the lead or we do so ourselves. If we do it ourselves there are some practical steps for planning a scouting trip:

A MAP of the area to be scouted, ether GPS or an official geological map is a must, and either (or both) should be on our person at all times. History abounds with stories of lost people who should have returned home but didn’t. Enough said? Probably not!

A FLASHLIGHT – a small but bright one with fresh batteries because you (or I) may end up trying to read a map or find our way in darkness!

A COMPASS – never go into an unfamiliar wooded, swamp filled, hilly or mountainous area without one! Some GPS’s will do, but not all! If you can read the stars and it’s clear, good! If it’s daytime and the sky is relatively clear of cloud, the position and direction of the sun can help. Do you know the direction to the nearest road or your pickup from where you are now?

SPENDING THE NIGHT ALONE? Did you plan for that?

FOOD and WATER – as in any matter involving survival we must know what to bring – and what not to!

A CAMERA and other means of record keeping. It’s too easy to forget important details otherwise.

Did you know that you could get lost on someone else’s property of 70 acres without a sketched map at least?

A few years ago I was involved in a bear hunt over bait on a private, unfamiliar property. While I was a licensed hunter yet my “job” was more of a consultant and assistant to the main hunter who was somewhat familiar with the farm (and we had an official map) and less than a mile from his own farm land. Yet it quickly became apparent that I was so unfamiliar with this property, which had a huge swamp, a large wooded area, a pond, rolling contours and no visible landmarks, that I could get lost in there without a GPS or map… or someone familiar with the property. In fact, when my friend finally shot a bear with his BP on the edge of darkness, it was well after dark before he stumbled upon the dead bear in a swamp after having searched in the wrong direction for well over an hour! The reason we searched in the wrong direction was due to the smoke from the black powder — he though the wounded bear went one way when it actually went in the opposite direction! I was over 300 yards hidden from him in my own tree stand when he fired. Thankfully the swamp was nearly dry after a very hot ‘n dry summer! But the grass was still very tall and he nearly stepped on the bear before locating him.

<One of the bears attending my partner’s bait site.

My partner was a sheep farmer and his schedule often involved last minute decision making, so I assisted in where to locate bait and stands and placement of my trail cam which told us an otherwise impossible to know story of the bears that frequented the site. He knew the property in general terms but not in detail. My stand was out of sight of his but close enough to hear his shot and lend a hand in finding the bear. So all such details go into a folder or memory bank called “Scouting results for future reference”.

As an item of interest, my bait was also hit and apparently by a good size bear as the barrel was drug through heavy bush in an attempt to hide it from other bears!

I became somewhat familiar with the part of that property we were hunting having spent a couple of days attaching stands to trees. I could have found my way out in daylight without a map or GPS. 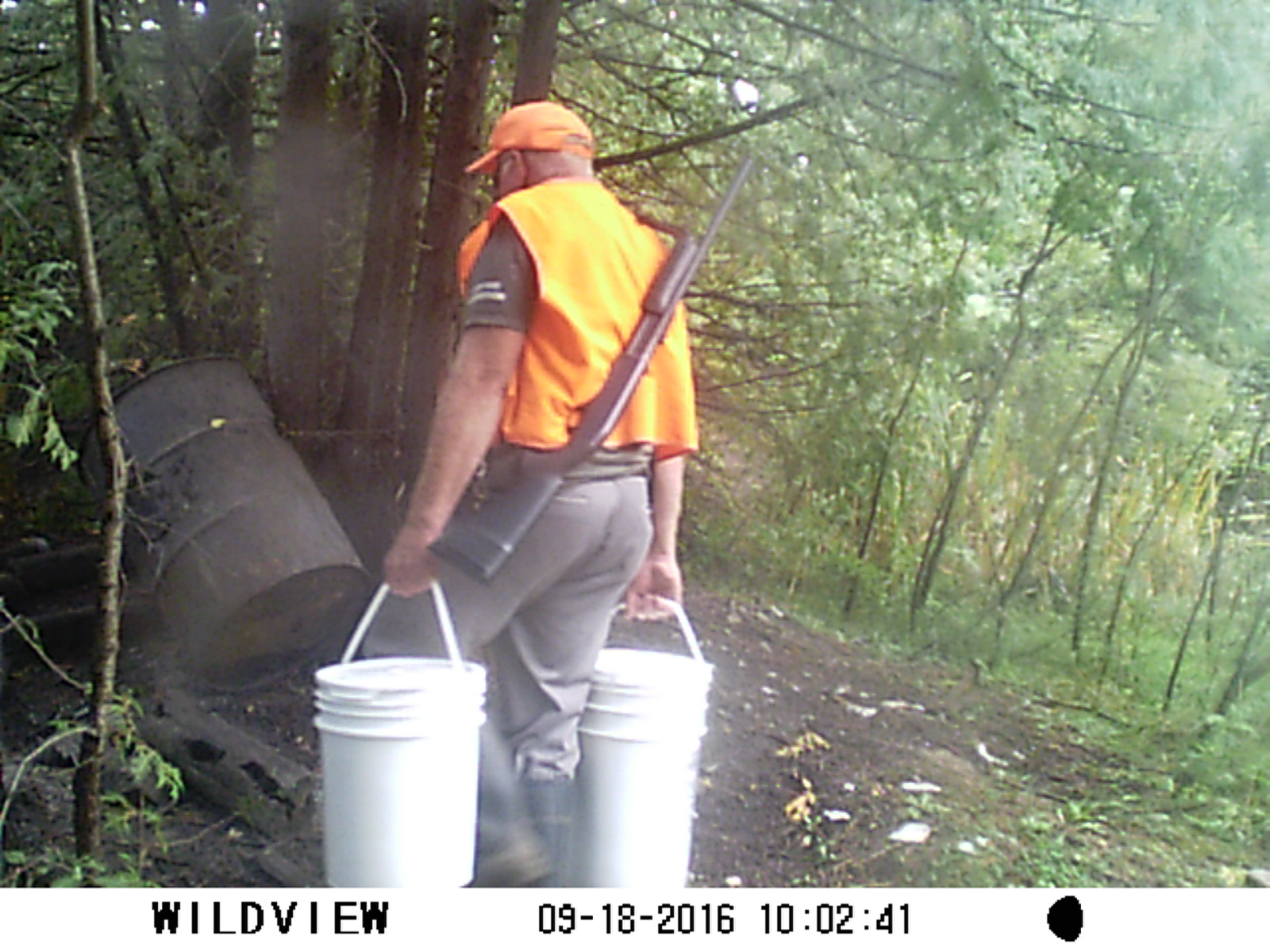 < Note the shotgun of my partner, Brian, in lugging bait to his site.

All in all it was an exciting adventure.

Hope all of your’s are as well!