Posted by bigborefan on April 17, 2021
Posted in: Uncategorized. Leave a comment

In a world of fantasy almost anything is acceptable. You can dream big dreams, experience some of it in a fantasy world and live happily every after. In the world of wildcatters, they have lived part of their dreams for something better while those of a more pragmatic bent have produced more practical firearms for real-life tasks. But some successful kittens have come from wildcats, like the .35 Whelen that has birthed some excellent bullets!

Are big-bore rifles practical in today’s world of shrinking hunting opportunities along with dramatically increased costs attached thereto? Added to that question is this: Other than the few – relatively speaking – who can afford decreasing opportunities for Africa’s Big Five, what justification could any practical-minded hunter come up with for owning something like a .416 Rigby, a .458 Win or .470 NE double? And then some claim that lesser calibers today can accomplish what was thought needed in days of yore.

Put that way — a need to justify rifle choices — could any of us justify something more than a .308 Winchester class of rifle cartridges? The first center-fire rifle that I almost bought in 1958-59 was a British Jungle Carbine chambered for the famous .303 British…. When I first pulled the trigger on it at a fence post twenty yards away its power seemed nothing short of awesome when compared to a .30-30! For decades that was the favorite Canadian rifle cartridge for ALL big game hunting, not only including some big stuff like moose, deer and bear, but the big white bears of the frozen North, as well as wolves in the tundra! So pragmatism is as pragmatism does!

As I wrote in the first edition of my .458 Winchester Magnum manual for handloading a dozen years ago: We all like some spice in our lives, and variety is that ingredient! Hopefully, we don’t get stuck on the same style and brand of sliced bread for our toaster that we accepted as “nouveau” ten years ago because it was the cheapest!

BIG BORES aren’t cheap! But then, neither is an Audi, but who wouldn’t like to own at least one sometime during a lifetime? Or maybe a Corvette, if into all-out sports cars? We buy things because of taste and lifestyle experiences. So BIG BORES will not be outdated until firearms, as we know them, will be. Or, more likely, draconian governments will ban them — except for themselves as in Communist dictatorships.

Long may they live!

Originally, I started to write this theme on: The APPEAL of BIGBORES, so I’ll continue with that as our current proposition.

A “proposition” is a position or argument based on perceived facts or truth. That the Earth is consistent in its yearly journey around the Sun is an argument that supports the Newtonian Law of Gravity, as one example. So why have I chosen “proposition” rather than “subject” or “topic”? Because I want to make factual statements, bolstered by physics and experience, of those proposed advantages! And that’s not to say there are no disadvantages such as increased recoil. But “disadvantages” isn’t the theme! And for those who, like myself, have chosen BIG BORES for a major part of hunting activities, have not ignored the disadvantages — we’re well aware of them, perhaps more so than those who are negative on this matter — but “all matters considered” the disadvantages are outweighed by the advantages, and many of the negatives can be cancelled by knowhow, experience and some work! But I’ll not go there this time.

The APPEAL of BIG BORES

Upcoming will be another comparison between the .458 Winchester Magnum and the one that attempted to replace it – the .458 Lott. For now, I’ll just say that the Lott has been trounced by the .458 Win in the hands of knowledgeable handloaders such as Dr. Ron Berry (see 24hr Campfire, Express Rifles and Big Bores/”What’s wrong with the .458 Win”)

My own experience with a CZ550 in .458 Win and my current .458 Win in a Ruger No.1 have proved their ability to at least match or surpass Lott loads in current handloading books. 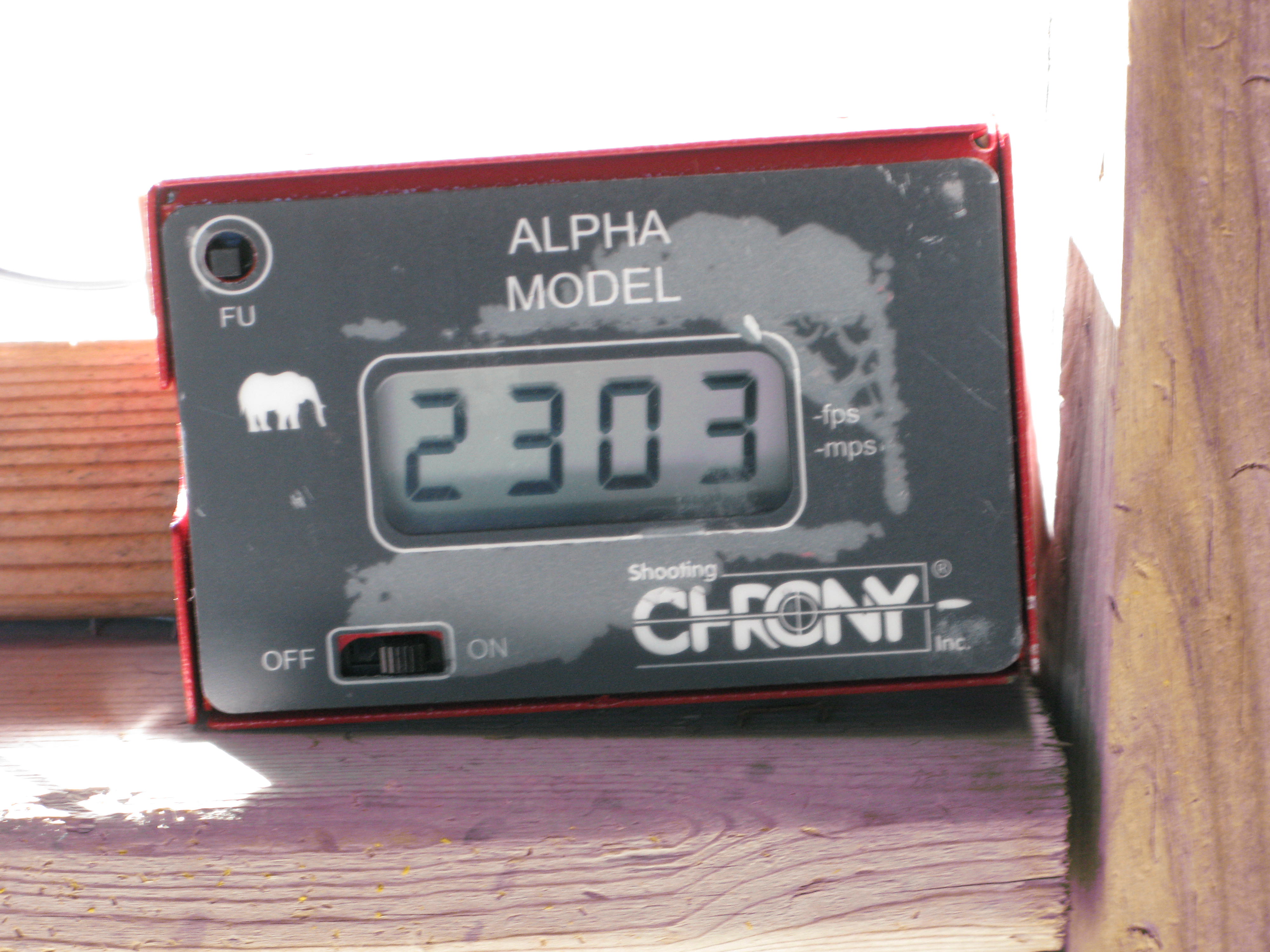 But the magic of the .458 Win is it’s long throat and the “endless” choice of bullets and suitable propellants available for both the .45-70 and .458s, from 250gr to 550gr. Beyond that there are multiple moulds readily available for making your own from pure lead to lead alloys. Your .458 Winchester Magnum can be anything you want or need from a plinker of tin cans to a cannon ball for elephants, and anything between!

I’ve owned my Ruger No.1 in .458 Win Mag since August 10, 2018. Out of a possible dozen acceptable loads so far, here are just three favorites, and a fourth that shows potential:

If my current arthritic condition is diminished enough by summer, I have several other loads for development and testing.

The obvious point: near limitless possibilities are available to the handloader of the GREAT .458 Winchester Magnum!

NO FEAR or DOUBTS!

When famed outfitter and guide of Alaskan behemoths, like brown bear that can go to 1500 lbs, are hiding in thick alders and underbrush from wounding by a client, Phil Shoemaker must do a follow-up into this “pucker brush”. While he owns a variety of rifles, he prefers his favorite in .458, “Old Ugly” that has accounted for many kills, as well as many moose and caribou at longish ranges.

A few times I’ve had to go into or through thick brush in a follow-up of wounded black bears. My preferred firearm was a Marlin in .45-70, in my view the next best thing with good handloads to a brawny .458 Win Mag.

The point is that whether facing a charge by a bear, lion, moose or dugga boy, you want a rifle and load that gives utmost confidence, with no doubts or fears! The .458 Winchester Magnum has proven its metal in that regard. Sure, there are those who fear it’s recoil, and in a test of their “metal”, flinch! In such a scenario, I’d not recommend a .458 Win or Lott, or any other rifle cartridge that causes fear of squeezing the trigger more than they fear getting eaten by a large lion or bear, or tossed by the horns of a Cape buffalo! “Take the largest rifle you can handle without fear of its recoil”, is sound advice by outfitters to their clients of DG.

Having said that, better advice is to learn to shoot with confidence and without fear the best rifle/cartridge for a potentially dangerous situation. In my view, as well as that of many experienced hunters/shooters, a .458 Win Mag of appropriate weight and size that almost anyone can learn to shoot well in the face of danger is the better choice. That’s been proven too many times by professionals and amateurs alike to negate any excuses for not doing so.

< Phil Shoemaker with “Old Ugly” in Africa and his recent Cape buffalo shot just under the horn boss!

The identity of anyone is found in their personal sense of successful living. In a relatively few cases they become famed, and that further secures their sense of personal identity. The worth to self and/or others of “who I really am” matters more than most people imagine. It is often magnified in the suicides of some who have lost their jobs or means of livelihood, or even in retirement if they have nothing else of equal value to replace it with. In counselling, I’ve often advised others not to retire too soon unless the have a hobby or other means of employment.

But, as in the case of Shoemaker in Alaska, the .458 Win Mag’s identity has in part been enhanced by Phil adopting it as his main weapon for big bear defence, and in turn, Phil’s own identity comes in part from his relationship to the .458 Winchester Magnum. Of course, he is also a writer of renown, and in the future will likely take up “the pen” once more to share his experiences in Alaska. If I’m still around, I’ll be among the first to purchase his book!

When we think of golf we think immediately of Tiger Woods. In boxing several names come to the fore: Louis and Tyson, plus others. In NASCAR, the Hendricks, etc.

In rifles, Col. Whelen, Ackley and Weatherby are a few among too many to mention. Some famous names come to the fore when Africa is mentioned: Harry Selby and the .416 Rigby; President Roosevelt and the 405 Winchester; Ernest Hemingway and the .505 Gibbs, and so on.

What’s your identity in the successful use of a particular rifle and cartridge among those who best know you?

But anyone facing “all comers” from hogs to elephant with one rifle reveals someone who is a disciplined student of firearms, courageous, skilled, and knows more than many might think. Of course, this assumes that all laws are obeyed.

However, there is an identity far greater. I’m most happy and satisfied to be identified with Jesus Christ my Lord and Saviour, without that eternal hope all else is purely temporary and mundane.