The topic is shooting BIG GAME at long range, not varmints or targets at long range. I was recently on a well known forum to do some research on the Long Range section. Almost without exception it was focused on small bore target and varmint cartridges and rifles, commencing with various .223 calibers up to the 6.5s, with the 6’s and 6.5 Creedmoors dominating.

No doubt that some .264 calibers are adequate for smaller, non dangerous game, like whitetail deer at 300 and perhaps 400 yards, especially in numbers like the .264 Winchester. However, for the slower 6.5s, such as the 6.5 x 55 and even the Creedmore, I’d not stretch the range much beyond 400 for large northern bucks.

Some will of course object, claiming the 6.5 Swede has terminated many moose. But please give me the conditions including the ranges. Sure, you could terminate any moose with a .22LR, 40gr solid to the brain! I watch quite a few videos of hunting big game both here and foreign. Rarely is the cartridge mentioned. I just watched Jim Shockey take a brown bear in Russia, as well as a mountain sheep similar to those in the Rockies, all with the same rifle but never once was the cartridge mentioned!

These 5 Mini-Mags where fired from my CZ455 in .22LR one week ago at our range at 100 yards. They would “stop” a bear hit in the brain! I’ve carried a .22 LR for small game and have little doubt I could deter or stop a bear with it in a “have to” situation at 15 feet. That’s NOT to say it would be a sane choice for bear defensive purposes >

For me, long range hunting and shooting of big game and dangerous predators begin with the 7mm Magnums, and the 7 Remington Magnum in particular (The Weatherby is similar with perhaps 50 to 100 fps advantage depending on barrel lengths, psi and bullets used.)

I bypass the .270 Winchester, though it’s a decent long range cartridge for whitetails, mule deer, etc., yet for large bull elk, moose or larger bears at 400+ yards I’d suggest the 7 magnums as minimum. Yeah, I know there will be those who have killed elk (what size and sex?) at 600 yards using O’Conner’s favorite in the West. I’d consider that “stunt” shooting! And the claim is with a 130gr !!! I seriously doubt that anyone with a modicum of ballistic knowledge (and experience) CHOOSES a 130gr out of a .270 Win for serious long range shooting of a mature bull elk these days!

*Those are estimates based on real ballistic results from the 130gr Nosler Partition at the given ranges, assuming body shots, not central-nervous-system (CNS) hits. It’s possible, of course, for the bullet to strike the spine (spinal cord) and drop the animal where it stands without killing it. At those ranges (long range) that would typically be a “lucky” shot, not the result of precision shooting. It happens, but it shouldn’t be taken for granted or planned that way.

So while the .270 Win might be adequate for cow elk and/or not fully mature elk of 300 to 500 lbs at 500 yards or so, it certainly would not be close to a first choice for myself as a long range rifle/cartridge for game that exceeds 500 lbs. Therefore, as stated, I’d recommend a 7 Rem Mag over a .270 Win any day of the hunting season for big game that might involve long range shooting. But then, my personal choice in a sub-medium would be more than the 7 magnums. That’s up-coming.

However that may be, the number one common cartridge in use for long range shooting of all BG from 300 lbs to 1000 lbs (where one rifle and load would be chosen) is the .300 Winchester Magnum, or it’s equivalent. Personally speaking, a .300 Win Mag has been, and would be, the minimum choice for the potential long range shooting — to 500 +yards — of a mature Canadian bull moose. When I chose to take my CZ550 in .458 Win Mag to Northern Ontario with a bull tag for moose in my pocket, loaded with the 350gr TSX at 2750 fps, my backup rifle was a .300 Winchester Magnum.

But certain conditions apply: If a pro guide or outfitter is involved in a place like Alaska, then a long range shot would NOT be permitted on a mature moose or brown bear, as a couple of examples. So, we’re talking hunts by residents of a state or province where such restrictions don’t apply. In a DIY hunt for elk or caribou, for instance, the hunter is on his own to make such decisions. And, without doubt, he’s already aware of potential scenarios. If he’s acquainted with the region of the hunt, he should know in advance what his rifle and load is capable of, and what he is capable of in its use under all conditions. 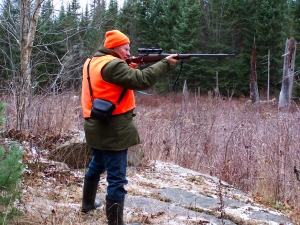 That was to simply show that a rifle and load capable for the heaviest target (BG, not DG) from 25 yards to 600 yards imposes on the shooter that he has adequate control, knowledge and experience as a rifleman and hunter. It’s totally irresponsible on the part of ANY hunter just to fling bullets into the air        (“Hail Marys”) hoping that one will connect with the animal in the right place. We must have a reasoned confidence that ANY shot, close or far, will hit the animal — at the very least — in a part that will put it on the ground within a reasonable distance, allowing it to be retrieved. Perhaps a “finisher” will need be applied at closer range.

I would only take a 500 – 600 yard shot if that were all that conditions allowed. Getting closer should always be a goal — but idealism may cause the loss of one chance in a thousand if the animal is spooked by the hunter’s movements, or decides to depart into nearby timber or bush or a lake (you can’t lawfully shoot them while swimming).

Be assured, that none should just assume they can make “that shot” without adequate preparation through knowledge of the bullet’s trajectory and exit velocity from the muzzle of the rifle, as well as realistic practice with BOTH rifle and load!

Til the next… Theory vs Experience. (I believe in both, and practice both. And so do you if you know that man actually landed and walked on the moon! And so do we if we’ve ever earnestly prayed and literally had those prayers answered in a way that confirmed our faith that God is real and both hears and answers the prayers of those who love and trust Him. Mere theology? Not if it works!) For instance: Have you used a chronograph to confirm your expectations of long range shooting? That too will be discussed next time.