The following equipment is absolutely necessary in shooting big game at long range. And that’s in addition to all that has been presented in P1.

I’ve mentioned that “long range” for myself is any distance beyond 300 yards. For some hunters it might be far less. We must know the limits of our ability and confidence.

But if we intend or plan to shoot game animals at whatever range they might present a clear shot, say 400 yards to 750 yards, then we will need more, much more, that bravado! In addition to sane judgement we will need:

Leave out any one of those factors and we will not only reveal a lack of knowledge, but also of sound judgement.

The right rifle is the one right for me or you, and they will be distinct in caliber and perhaps different in configuration. A number of rifle cartridges were briefly discussed in P1, along with some of the rifles chambered for them. 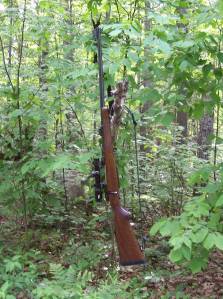 The .458 Winchester Magnum was mentioned as a possible long -range rifle cartridge for myself in the far north of our Province of Ontario, if moose were the target animal. Yet I recognise that it would not be for the majority of others.  At our range this morning a couple of hunter-shooters were curious about my “elephant gun”. I’ve explained to quite a few members over the past few years that a .458 Win Mag makes an excellent medium game cartridge for North America if you make your own handloads. When it’s pointed out that it can be loaded like a mild to hot .45-70, and show them some of those loads, their eyes widen and ears pick up!

I briefly referred to the 400gr Barnes X-Bullet at near 2600 fps as a possible long range number for moose to 600 yards. Because of its claimed .457 BC it would still be making over 1600 fps, enough for some expansion, according to Barnes promotion of their “X” and “TSX” bullets.

But all that is THEORY until proven! I never expect to be shooting any live game at 600 yards during the rest of my earthly existence, and never have, so it’s a moot point. And I don’t have access to a range that allows shooting beyond 300 yards. But if I were 34 instead of 1/2 century older, I might like to have the opportunity to prove all that to myself as well as for the benefit of others. Still, it will continue to ONLY be theory until someone comes up with a big game 400gr bullet in .458-cal and a BC of .457!

In general, I much prefer to prove through experience that what I write about is more than theory. I want it to be factual. But the bare truth is that with the proliferation of very sleek and high numbered BC big-game bullets today, we (most of us) can’t test them all — and certainly NOT at ranges beyond about 500 yards. So, I write theoretically sometimes with the hope that someone “out there” will be able to confirm or deny that certain bullets will work as promoted at near or far ranges.

The 350gr TSX in .458-cal was loaded for a moose hunt in N. Ontario in 2008, as previously mentioned. But I was a bit “on the horns of a dilemma” as to it’s actual ballistic coefficient. That matters! I couldn’t understand, when talking with “Ty” at Barnes, how the 350gr X-Bullet in .458″ could have a BC of .402 with one groove and when it was reintroduced with three grooves the BC was drastically downgraded to .278. That’s a BC of merely 69% of its former value! So, what’s with that Ty? Something smelled “fishy” to me (and I should know as I’ve dressed out many thousands of haddock, pollock, cod, ect. in younger years as the third son of a commercial fisherman in Eastern Canada)! So I went to work at our limited 300 yard range to do some testing of that bullet in my CZ550, .458 Winchester Magnum.

First, a chronograph was used to ascertain the MV. Then that load was shot at 100 yards to establish POI, followed by shots at 300 yards to determine POI. From the drop at 300 yards it was easy to calculate the approximate BC of the 350gr TSX. I also used data from the Accurate Reloading Forum provided by “Michael 458” in testing that bullet at his home range. He provided MV and velocity at target. All matters considered, my calculations gave a BC of .328 for the 350gr TSX, while Michael’s was higher still.

This past summer I tested the 350 TSX in my Ruger Tropical in .458, and the following MV was recorded at 15 feet from the muzzle. Corrected to MV that would be 2780 fps. Employing a BC of .328 we get the following results to 500 yards: 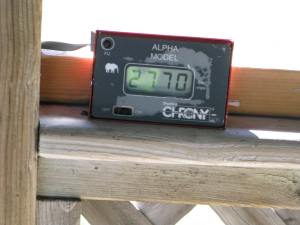 I could live with that and be “happy as a haddock in the Atlantic”.

Where theory and reality might clash is when the trigger is squeezed in the field. Happy is the hunter whose theory is confirmed and not devastated!

In truth, more big game have been “harvested” with numbers like the .30-30, .308 Win, .270, 7mms, .30-06, and .300 magnums than anything else on the N.A. continent. Yet for the travelling sportsman who has a few years in the field, a new rifle firing a different cartridge adds zest to a sagging enthusiasm.

Where does one hunt and shoot game that stretches bullet trajectory to, say, 750 yards? And how do we know it’s 750 and not 450 without the use of a range finder ? You know, it’s always the fish that got away that’s much bigger than any in the boat!

And how do we assess the size and sex of the game without a rifle scope ideal for such hubris?  Having more than a few years in the field should have taught us something about our ability no matter the power and cost of the rifle with its ancillary equipment! Does a $2500 rifle scope decked out with adjustments fore and aft, on top and both sides, qualify us to pull the trigger on our custom super-magnums on live game at 750 to 1000 yards? I’ve owned some very accurate rifles with handloads and decent scopes, but I’ve never been where such a shot was wise or even possible. A broadside adult moose is a large target, as also some others are, but to stake my reputation only on the Long Range Internet forums would be a grave mistake in my view. Yet there appears to be a certain growing number who sacrifice the joy of mere hunting on God’s earth for the sake of antler points at unforgivable distances, all with the intent of making a name for themselves.  “And I want you to know that I shot that ram at 458 long yards according to my Zeiss range finder. At the shot he fell off the cliff and tumbled for 350 yards to the bottom… and the horns were not damaged… see for yourself! Am I not wonderful?”

A spotting scope: Only if needed, otherwise it will become added weight and take up space in a backpack. It’s intended as a complement to the rifle scope when range denies important details. A few years ago I watched a video of a black bear hunt on Vancouver Island. Two men were involved, but only one was the shooter. The other used a spotting scope. An excellent shot was made on an approximate 350 lb bear at just over 500 yards. All was set up prior to the shot across a valley. The bear immediately disappeared into thick bush and fell into a ravine that took over two hours to retrieve. All of the equipment was specialised, including the rifle… AND the shooter! He had fired OVER 1000 shots using the same rifle and load in PRACTICE!

Binoculars: I consider them optional for long-range shooting if a spotting scope is on board. Yet, I’ve actually used binoculars a lot in hunting – over bear baits in particular. For bait hunting bear, when they might only show up at the last dying legal minutes of the hunt, a good 7×35 or 8×40 are tops in my experience.

As to a recommendation of a rifle and cartridge for the dedicated long-range hunter-shooter, he/she doesn’t need my recommendation, but it would be hard to beat something in a super .338 magnum, such as a .340 Weatherby, .338 RUM or .338 Lapua. And that’s due to a couple of factors: the SD of .338 projectiles, hence also their BCs. They also can be pushed at decent speeds without major physical trauma to the body.

In writing on “Long-Range Hunting”, I couldn’t have stated my feelings better than Dan Schindler, Founder, Owner and Manager of Paragon School of Sporting Inc.. He’s become a friend through frequent correspondence. Dan is a trainer of trainers in sporting clays and wing shooting, as well as in rifle.

“Collect all the gear you want and be rightfully proud of what you have purchased. Seriously, good on you. But have no delusions about that gear assuring you of a 1 shot, 1 kill at very long distances. That responsibility falls directly on your shoulders and should weigh heavily as you contemplate pulling the trigger.”