Posted by bigborefan on September 12, 2020
Posted in: Uncategorized. Tagged: How to Hunt Black Bear - P4. Leave a comment

This time we look at: 4) Spot-n-stalk, and 5) Hound hunting. In addition, further observations and conclusions will be made.

SPOT-N-STALK: This I’ve only done during the Calling episode described in P3. And it was very brief. I’d started to follow the big bear I’d called in before deciding to let it go rather than shoot it in the rump. Otherwise, I’ve never seen a non-wounded bear that I could track.

This is more of a type of bear hunting in the west of North America in more open country, such as the foothills of the Rockies or Vancouver Island with huge swaths of clear cut timber. It could conceivably be done in other areas where clear cutting has taken place, or on thousands of acres of open agriculture land with intermittent blocks of timber or bush. I know it’s done occasionally in western Canadian provinces.

As the term suggests, it’s a matter of sighting a bear in whatever conditions and being able to track it with the hope of closing the distance which makes possible a clear shot. It also involves a possible offhand shot if that’s the only one available should the bear be moving, or will quickly disappear interminably into thick timber or a ravine.

(It would have been possible to have seen and tracked a bear here in the open ^ as there were several old clear cuts. There were also huge piles of bear scat and wolf scat. I had licences for each as well as a moose ticket and one for a buck whitetail. However, my mission was a bull moose in N. Ontario. That was my CZ550 in .458 over my shoulder loaded with 350gr Barnes TSX’s at 2750 fps.)

Some hunters prefer this style as it seems more “natural”. That is, it’s the traditional form of what has been termed “fair chase”. There’s nothing wrong with that as long as those hunters don’t become “snobbish” and look down on, or despise, others who prefer a more practical approach, as in baiting or with hounds.

With increasing costs of all forms of hunting, and limited time compared to those who “live off the land” where fauna may habituate, spot-n-stalk will suite few whose lives are consumed by urban living in big cities.

HOUND HUNTING:  I’ve never done it and never intend to! I don’t keep hounds and have never even owned a pet poodle! Plus the fact, it appears, from what I’ve read and watched on video, that you need to be somewhat superhuman to keep up with the “traffic” of bear, hounds and professionals who do this day-in-and-out! NO THANKS at any age, but specifically past 60 years or so! Then, I don’t like the idea of shooting little bears out of trees, which most appear to be!

However, a huge bear was shot in the area of my traditional bait setup — done so by hound hunters! So it must work for some. But they killed “my bear”! It dressed out at 568 lbs! That’s about a 650 lb black bear when alive and feeding on the goodies I presented at my bait site! 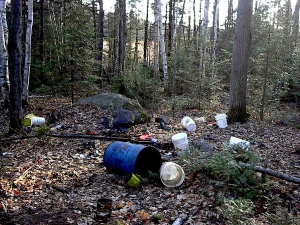 No resentment though… it was legal and fair chase… sort of.

(Left click on photo for a better view. This was the site where the 650 lb bear was in frequent attendance. But he was nocturnal.)

The amount of equipment and costs for a professional operation is astounding: 4×4 pickups, ATVs, radios and radio collars for the hounds, GPS’s, and fit men to operate all that in addition to keeping track of a half-dozen hounds, or more, staggers my imagination… I can’t begin to relate!

Short-barrelled lever-action rifles, or big-bore handguns and 12ga with slugs would seem best under a tree if there’s a bear “up there”… But if it weighs +400 lbs, don’t stand too close to the tree!

It probably is for those with “ants in their pants”!

There you have it: Five styles or methods of black bear hunting. Which would you choose? Tell me if you’d like to, or if you’ve done so.

Coming up for the balance of September will be a presentation on long-range shooting of game and predators.

A few days ago, I was reminded by a friend that the so-called “big bears” (grizzly) have been killed by the 6.5 x 54 Mannlicher a hundred years ago. Of course, precise details were not available, but as I checked that idea using my MTE formula, and adding a few more fps than the 6.5 Mannlicher…, I conceded that it could be done using a good 160gr at 2400 fps at close range.  Of course, “close range” is more like 25 feet, not long range at 500 yards (1500 feet)! So, long-range shooting of game is how far according to you? I consider 300 yards, and beyond, long range. But the longest range that I’ve ever shot anything was groundhog at 340 yards, and it’s much more challenging to successfully kill a 5 lb animal with a single shot at 340 yards than, say, an elk at twice that distance, assuming adequate ballistics for each!

To add some spice to the notion of killing a “large predator”, such as a grizzly, with a puny 6.5 x 55 Swede, of which I’ve owned the grand total of two, and handloaded each, let me say that after a “fiasco” involving the hunt of a big Northern Whitetail buck with mine, I never used it again! And I’ll explain why in my next blog.

Yet bear have been terminated using the lowly .22 LR! So was a lion finished off in Africa with the use of a single-shot from the same, as was a wild African cow with Texas-like horns by the same rifle and hunter! So there are exceptions, sometimes in the extreme, to what we think we know! 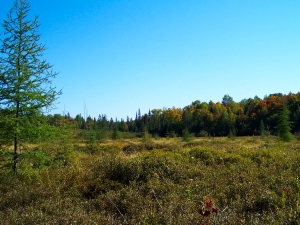 Long range is how far, and under what conditions? What is your longest successful shot on a predator or BG animal? As you mull that over, I’ll be writing my thoughts and prognostications.

<It’s about 425 yards from where I stood for this photo to the farthest corner of the bog where the skyline of trees sharply drops and appears smallest .