Posted by bigborefan on January 7, 2023
Posted in: Uncategorized. Leave a comment

This section discusses RIFLES and their CARTRIDGES for BEAR HUNTING using baits. Of course, I’m aware of other methods and means: Shotguns, hand guns, BP, bows, and if one has Tarzan in their ancestry, even spears. But for my purposes, I’ve always employed centerfire rifles, so I’ll stick with that. Anything else in my view is both less versatile and effective. That of course depends on the situation and goals. For instance, if someone wants to us a BP rifle then they are choosing a less effective range, a slow second shot and the resultant smoke limiting vision of the immediate reaction of the bear. I was involved with a partner who used his BP and we ended up on a one-and-one-half-hour search in the wrong direction for a wounded bear! I didn’t witness the shot as I was in a different locaton, but I heard it and in meeting up with the shooter he said he couldn’t see where the bear went but thought it was in “that direction” which turned out to be 180* from where the bear actually went!

A powerful handgun (where legal) means limits from stand to bait. Same with a bow or crossbow as well as in using a shotgun. A few times I’ve brought a 12ga along, loaded with slugs as a backup, but never as my primary weapon.

Hence RIFLES and their CARTRIDGES as the best overall choice.

Internet forums aren’t the best source of information for this subject as everyone has an opinion, and often they can be contradictory and confusing. But, nonetheless, the Internet may still be a good source for finding books, videos and articles on the theme. For myself it’s been learning on the job type of thing, and having a very good professional guide/outfitter for the first eight seasons, known as “The Bear Man”. There’s really no good substitute for a good and experienced teacher. So, what I share in the following paragraphs will be from personal experience and observation of others dating back to a spring hunt in 1989 in NE Ontario, my home province, and every year since with the exception of a couple.

The RIFLE: There are several common types and they will all serve us well if we are familiar with the one we choose, and it agrees with us. 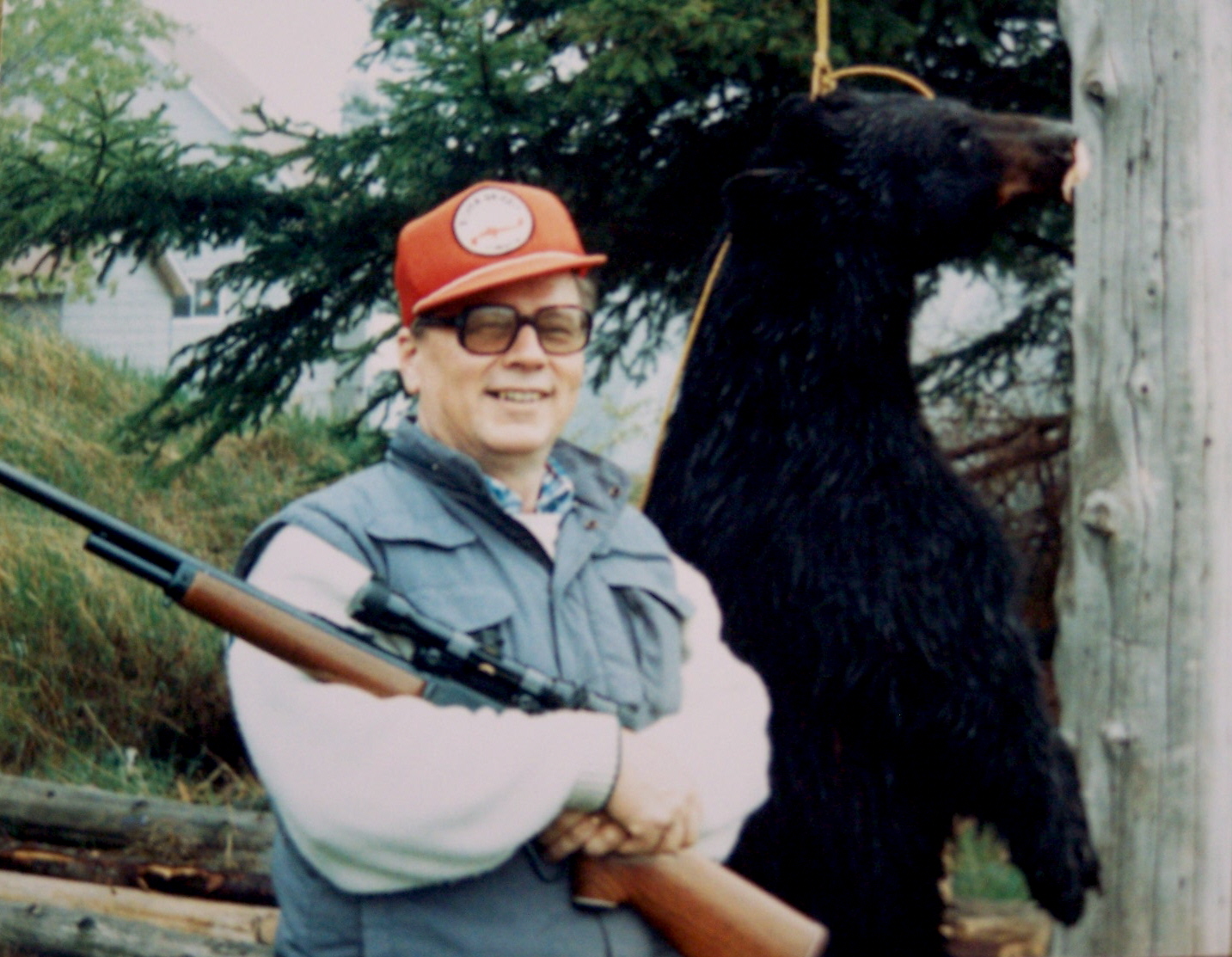 BOLT ACTION: This is perhaps the most common. In bear-worthy cartridges under all conditiions something may be found that is suitable for the hunter and the conditions of the hunt.

Their advantages are: familiarity, a simple mechanical device, accuracy, available at reasonable cost, built for scope accommodation, and suited to any power level.

1) If a lefty it may be near impossible to find the one you’d like in a left-hand action.

2) Or, the one you’d like doesn’t have iron sights as backup.

3) Location of and type of safety – personally, on any type action I prefer a tang safety.

4) And there may be other nuances about certain bolt-action rifles in the cartridge of preference that just don’t agree together as a well tuned unit, including the price!

For example, about a year ago I looked at a Savage chambered in .375 Ruger. The price was right, it had a laminate stock, 23″ barrel, muzzle brake, stainless action and barrel, but was too heavy, especially with a variable scope, and loaded it would make over 10 lbs – good for a .458 Win but not for a .375 H&H type ballistics. Then the store had neither factory ammo nor brass for reloads. So it was a pass. That’s just an example of a good idea that came short on adaptability for the type of hunts I’ve done from close quarter tree stands overlooking bear baits at +/-100 yards. Then not the most handy for close ranges in brush work in scouting bear sign. I had a similar Remington rifle in 350 Rem Mag with a short action but was just way too heavy for the conditions I’ve just described – so after about a year’s use it “went down the road”.

The point is: The rifle must fit and be comfortable to tote and shoot after a day’s hike in rough terrain, or sitting in a blind or treestand when, without notice, it is forced into immediate action without complaint or rebellion!

And even if it’s a bolt-action, we make no excuses for it!

Because of great differences in the sizes and attitudes of bears, as well as their habitats, I want a STOPPING cartridge for the first well-placed shot, no matter it’s host… be that a bolt-action, semi, lever-action, double or single. In a bad situation we’ll get a single shot and it better hit where a bear’s life comes from! Don’t count on multiple hits! If the cartridge is more than capable to begin with, and the rifle fits like it has been your only for the past millennia, ten more in a clip will be of no help if a bear charges from 20 yards!

In black bear hunting I started with an 1895 Marlin in .45-70, and I took my first bear ever with that rifle! Yep, and I also had a Sako FS in .338 Win Mag in the locker… but the Marlin took that first hunt and the second that gave me a trophy bruin! If you reflect a half-minute on what I just said… that will tell you about all you need to know about my mindset, experiences and attitude. After thirty-five black bear hunts – the majority over baits – I have some rather fixed opinions on rifle catridges. And I don’t go into Ontario’s wildernesses looking for a 2-year old, but with expectatons that anything, even the “worst thing”, could happen! It’s called “being fully equiped AND prepared” for “whatever”!

No bear – including brown bears – are dangerous at 300 yards, though they could close that distance in less than a minute if for a reason known only to them they choose to do so. Or if they put a sneak on the unwary through thick brush! A female in particular with cubs may sneak away if unseen, OR she may charge the unwary from less than twenty yards! A mature sow or boar bear can cover that distance in three seconds – that’s 3 not 10! It may take most of that time if not all of it to get over the initial shock, let alone aim carefully at a 30mph charging ball of teeth, claws and muscle! Recenty, I’ve watched several videos of attacks on men and women by sow bears with cubs that was unprovoked. A few had near-death experiences, but as in many human experiences, the survivors later expressed the thought, “They were only doing what was natural for them”. So, in a sense there was empathy expressed for the bears! But many murderers also are only doing “what is natural for them”!

Without preaching here, we must resist, with any means available to us, anyone or thing that is making a deliberate attempt to harm or kill us. THAT is NOT the time to be merciful! And being fearful will not cause a Putin, or a bear, to be merciful to you! If you are bare-handed, punch the bear with all your might right on the end of its nose! With thumbs, goudge out its eyes! HAVE NO MERCY! But best of all, carry a firearm that you are very familiar with an use it! Save your empathy for your family, if you have one, or at the very least for your own skin! A 150 lb sow bear can do you a lot of harm, let alone a 300 lb hungry male!

In bear country I always tote a powerful rifle loaded with bullets that will work… every time! We must test bullets in tough media, or verify their credentials from trustworthy reports. I do a lot of testing… and will do more this spring, God willing.

I have confidence in the three big-game rifles that I still own, and have developed very effective handloads for each. A new bullet has arrived from Santa this Christmas for the .35 Whelen. Five have been loaded for testing of accuracy and MV. Later on in tough test media.They are the 180gr TTSX’s. Expectations from a full load of CFE 223 is around 3050 fps – 3100 fps, in the realm of a .300 Win Mag. And I’ll be loading up some 300gr TSX’s for my .458 Win Mag at somewhere between 2750 and 2950 fps. A bear hunt for the spring is being worked on.

Depending on expections, regions and seasons, some popular bear cartridges can be found from the .270 Win to the .375 H&H. Personally, I like powerful mediums (.338 – .375) in the magnums, but with the addition of my two favorites: the .35 Whelen and 9.3 x 62, they have replaced all others in that class. I consider “MEDIUMS” as starting at 4000 ft-lbs of kinetic energy at the muzzle using midweight to heavyweight premium projectiles. Then, of course, my favorite of favorites is .458-caliber in .45-70s and the mighty .458 Winchester Magnum. But the choice of bullets is critical.

< 350gr.458-cal fired from my Ruger No.1 LT at ~2500 fps at a 100 yard target and retrieved from the backstop: sand, gravel and mother earth, plus untold thousands of bullets and fragments buried therein. That is a tough test for any bear-worthy bullet!

In a hazardous encounter with a bear, elephant, hippo or wolf pack, the most lethal weapon we have is not in our hands but what’s in our head… the story of the native girl who killed the record book grizzly with her little .22LR single-shot rifle comes to mind.

How smart are they…? But, “How crafty and cunning?” might be a more apt question in a series on BAITING BEAR for Hunting…

Suburban bears can open the door of your Cadillac SUV, enter, steal your lunch, and leave after closing the door without you ever knowing what happened to your lunch! They can do the same at your cottage! But they can wreck havoc at both if they find some kind of evil pleasure for driving you mad and away from their comfortable and familiar settings! They have been tested and proven to be able to figure out solutions to problems, and considered near the top in animal intelligence – much more so than the moose or even the wolf! Maybe they could play chess with a chimpanzee and win! How do I know that? They’ve played chess with me more than once… and won! And I’ve played a lot of “chess” in my day…

There’s a correlation that exists between the bullet (it’s weight and caliber), its velocity at impact and its effectivness – assuming good construction and POI. It’s logical (logistics): bigger, tougher and more dangerous animals demand bigger, tougher and more dangerous bullets fired from cartridges and rifles with precision. It’s not “Pray and spray!”, but “Practice and prayer”!