Posted by bigborefan on June 11, 2022
Posted in: Uncategorized. Leave a comment

There’s little doubt that the most common and popular of those four is the .300 followed by the .338. Both are still widely embraced, if the sale of rifles, ammo, dies, bullets and discussions are indicative of their use. At one time – near it’s beginning in 1958 – the .264 was quite popular, then some problems developed, real or imagined. With such a large case for a relatively small bore, large doses of powder tended to create a lot of heat with the unhappy result of throat erosion. Then an ideal slow-burning propellant was difficult to find – either they were too slow or too fast for a maximum-efficient burn. Some claimed the .270 Win was better overall. Then Remington created the 7mm Remington Magnum based on the same case as the .264 with improved ballistics. Potential buyers of the .264 Win saw the 7 Rem Mag as a more favorable choice. 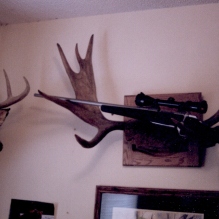 <This rifle was chambered in .338 Winchester Magnum when bought new. It’s a Browning A-Bolt SS in left-hand with a 26″ barrel. In that form it gave up to 2842 fps from a book load of RL-19 and a 250gr Hornady SP. Sometime within it’s first year I had it re-chambered to a .340 Wby Mag that shot the 250gr Partition to 3000 fps. That became my moose hunting load.

Having considerable experience with each in thousands of rounds of handloads, there is quite a bit of overlap with the .338 coming out on top in sheer energy numbers, while the .300 has slightly less recoil and flatter shooting for smaller big game. I’ve tended to favor the .300 as being slightly more versatile. But with the multiplicity of component bullets for each, the handloader can tailor ballistics for anything from bambi to brown bear. Though when it concerns a hunt for the likes of large moose and bear, under all conditions, I’d choose the .338 over the .300. In such a case, there’s no substitute for bullet weight, sectional density and energy, assuming the “best” bullets in each.

At one time I was faced with a choice of either one in the same make and model rifle: the Ruger SS, M77 with the “boat paddle” stock. After some dithering, I chose the .300 as I already had a “heavy hitter” that filled that niche. Today, I’d lean toward the .338. Both had 24″ barrels.

While, as suggested, there are more than enough bullets of different types and weights for each, this is how I might load them today:

2) The .300 has a flatter trajectory but not enough to make a significant difference on large game such as moose or elk. However, for small deer, wolf or coyote, the .300 has an advantage at long range. But both are adequate for moose or elk to 500 yards at least.

3) In a choice for dangerous game like large grizzle or brown bear, and large Alaskan/Yukon moose, the .338 has a distinct advantage as most will be shot much closer than 500 yards. And the .338 has greater momentum from its 250gr even at 500 yards, as well as a higher SD and larger bore by 21% in cross-sectional area at any range from muzzle to terminal ballistics. So today (If I didn’t already have the 9.3 x 62) I’d choose the .338 over the .300 if given a choice between two otherwise identical rifles.

Then, there is the matter of 20% greater recoil from the .338 (depending on how each is loaded). If someone can’t be comfortable with the “kick” of a .300 Winchester Magnum (or other .300 magnums) then I’d certainly not recommend a .338. My .340 Wby produced 54 ft-lbs of recoil from it’s hunting load and I really couldn’t say it was punishing in the least. That’s considerably more than the typical .375 H&H. But with time and experience in shooting such rifles, blindfolded, it would be difficult to discern the difference between any of them. For a time I used a local smith for some work, who formerly worked for the Canadian military as a smith. He told me: “I did so much testing that they were all just another firearm. I couldn’t honestly tell you the difference between a .458 or .30-06, they are all just another firearm to me”.

I pretty much came to that same conclusion. The biggest difference in “felt” recoil was the rifle itself – its form and did it “fit”? Weight was also a major factor. Then, how I held it in bench shooting. I learned early on to pull it tight to the shoulder WITH BOTH HANDS! And don’t slouch – sit up straight allowing the body to move with the recoil as in shooting offhand in hunting.

If one only learns to shoot small bores as in benchrest style, they’re gonna get whacked in the chops real hard if they use that “style” for a .338 Win Mag, and maybe from a .300 too!

In my view, Winchester did a great job in producing that series of four in the late ’50s and early ’60s, that have really never been improved on by their “Short Magnums”, nor other brands and iterations. The .458 is still a factory standard for African DG firing a 500gr at 2130 to 2150 fps (over 5000 ft-lbs), and handloads that equal or surpass the Lott (to 6000 ft-lbs); the 300 is a world class cartridge for big game at any realistic range as well as a favorite for target shooting. The .338 is still a serious choice in Alaska for its overgrown moose and bears, and the .264, despite a lot of negative press and more than enough competition, is still alive and capable of “getting the job done” on anything to meet Winchester’s intentions – at stretched ranges.

Long may they live! 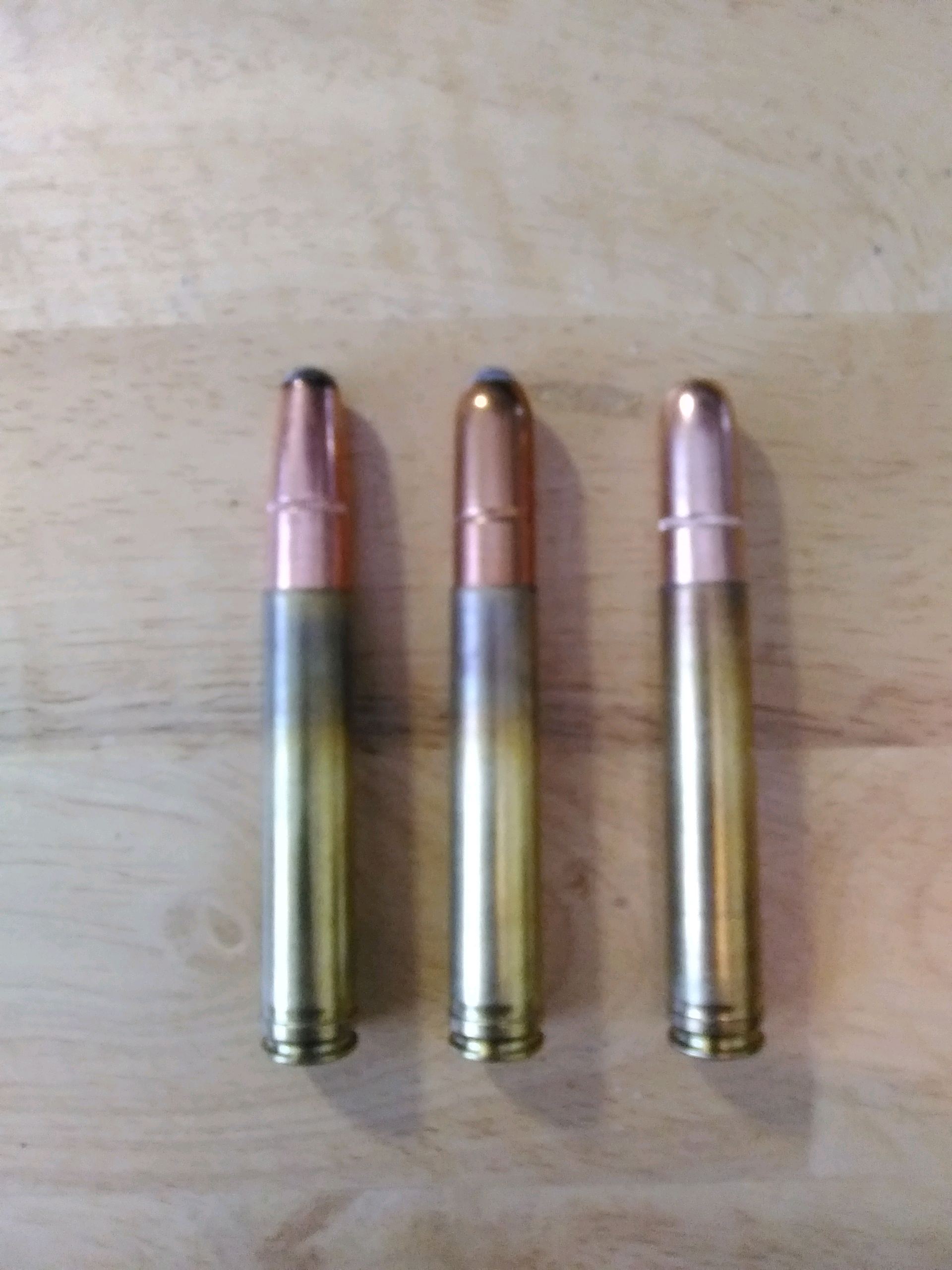 < Three heavyweights loaded for my Ruger No.1 Tropical in .458 Winchester Magnum. L to R: a 600gr Barnes Original, a 550gr Woodleigh Weldcore and a 500gr Hornady DGX. The one in the middle was fired today (Friday, June 10/22) along with several 250gr MonoFlex’s. The rifle is sighted for those 250s at 2686 fps MV/4005 ft-lbs that cluster into a tight group at 50 yards. A .458 WM can shoot that bullet to 3000 fps with ease! The 550 Woodleigh registered 1657 fps, and corrected to MV = 1666/3389 ft-lbs, which is adequate for anything short of elephant. That’s a greatly reduced load, but within range is more than adequate for the largest and most dangerous game Alaska can throw in its direction! That bullet at “full bore” can easily register 2200 fps from a 24″ barrel at the COL presented above.

And despite its critics, the father of them all – the .458 is not only able to fulfil its promises, but is better than ever!