Some say… “It doesn’t matter WHAT you shoot…”

Posted by bigborefan on May 7, 2022
Posted in: Uncategorized. Leave a comment

… as long as you use the right bullet and put it in “the boiler room”… Huh? Some, even from Alaska, are claiming a .243 Winchester is enough for moose! Now such a statement leaves me with too many unanswered questions to lean upon a strategy involving a .243 Winchester and adult moose. Under exactly what conditions were those moose terminated? How close were the hunters to the moose? How far did the moose travel after ” the right .243 cal bullet” disrupted his boiler room?

And the hunter… what was his/her status? Walking, running, sitting, chewing gum? How many shots fired? Any hungry bears (the BIG ones!) in the area? A backup pistol in a pocket? Why must we believe such drivel…. because so and so said so?

How many among you have hunted moose, North America’s largest game animal? Would you choose a .243 Win as your primary firearm… under any and all conditions? 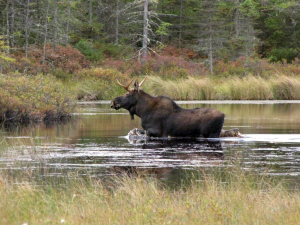 I’ve hunted moose quite a few times in my home Province of Ontario, in various areas and typical unpleasant conditions – and without a guide or outfitter… there’s no way I’d choose a .243 Winchester for such a hunt! For the kind of hunt I’d anticipate, a .300 Winchester Magnum would be minimum. Yes, and with “premium bullets”. Recoil wouldn’t even be a consideration. Offhand shooting to 150 + yards is a given, beyond that African style sticks could be used or finding a natural rest for the rifle.

I don’t believe in “stunt shooting” any animal, big or small. I create my own ammo and put in lots of practice time with each. In all, I’ve fired my new .35 Whelen forty-four times at the range, and of those, three were from offhand at 50 yards, all hitting the target. This rifle is new to me, with a new scope and load. On Sunday, May 1st, that rifle was taken to a new bear hunting area, for locating a bait station. Four cartridges were in my left jacket pocket and one in the chamber: 225gr Nosler Partitions over 65 grains of CFE-223 for about 2770 fps. The bait was placed and I chose a spot for the blind, did some scouting and came home. The bait will be checked in about a week for any activity. If none, I’ll give it another week after refreshing the bait setup.

In the meanwhile, I’ll not be buying a .243 Winchester with wrong motivations to prove something to myself!

The smallest caliber I’d use in that situation is 7mm, and perhaps, based on the same parent case as the .243 – the honorable .308 Winchester, a cartridge in ballistics superior to its little offspring, and overall a better choice than .284-caliber, another offspring of the world renowned .308 Winchester.

I’d never recommend a cartridge similar to a .243 in ballistics for such a bear hunt as I’ve planned because: 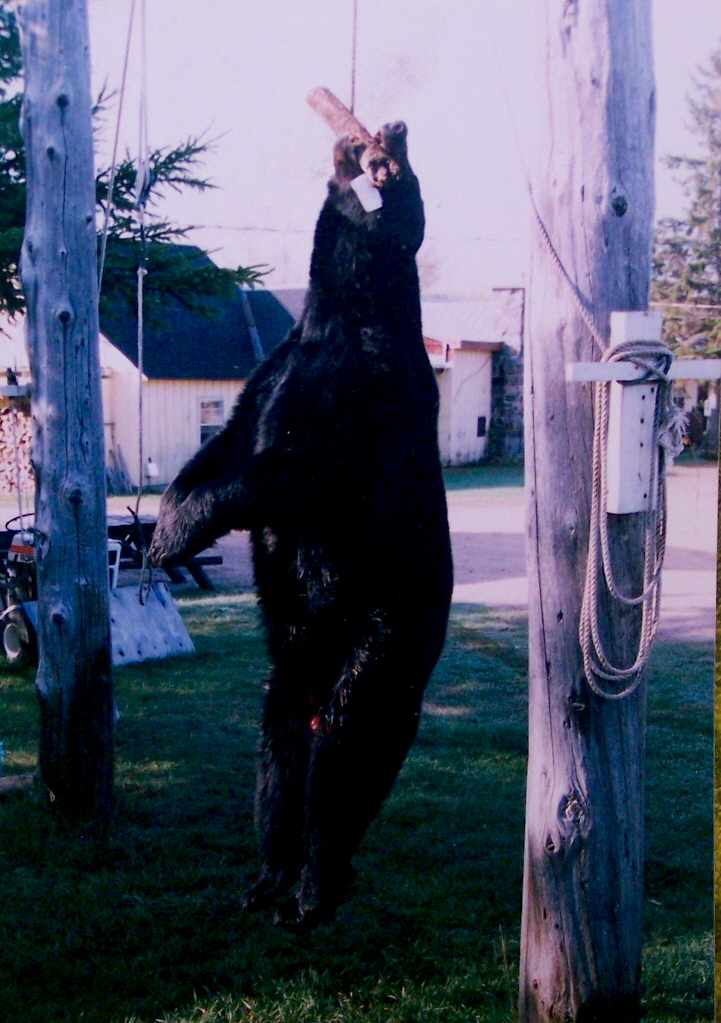 2>A bear’s nature is too unpredictable. It’s possible to encounter an aggressive bear in approaching the bait for refreshing it. In such a scenario, I want a powerful, quick-handling rifle that will stop a bear with a single shot. And I’ll not have an entourage of a guide or other hunters and friends with rifles!

3>At any age, but especially now as a great-grandfather, I don’t want to have to followup a bear in blowdowns and thick bush. It may rot before I get it out! I want it dead right there in the open where I can see it and field dress it!

4>And I’ve had enough experience in killing bears to know, without any argument to the contrary, that bigger and more powerful cartridges work best! That’s without further discussion as far as I’m concerned! 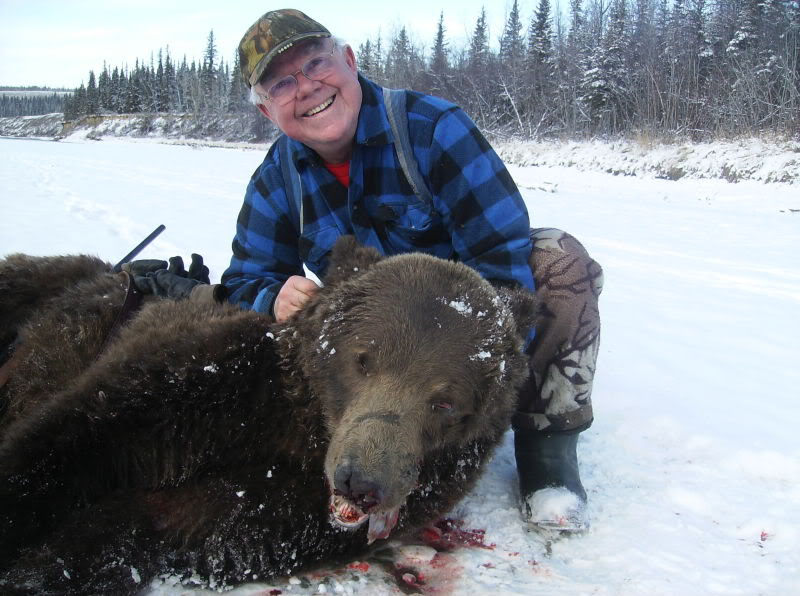 <Should Ted have hunted this Yukon grizzly with a 6.5 x 55 instead of his 9.3 x 62? He was his own guide with his wife as companion. The bullet was a 270gr bonded custom – he took only one shot!

Using small bores to prove a point is an unnecessary risk added to the usual ones, and stupid in my view as the hunt is NOT to prove a bear can be killed with a .223 or .243, but to cleanly harvest a dangerous game animal with a sane choice of cartridge/rifle that doesn’t need to finesse anything!

It seems there’s an obsession these days with certain men of advancing years to prove they can manage as well in using “small bores” as they did when using “powerful magnums” in their younger years! As we advance in years and experience, there should be better wisdom in our choices, but that in NO WAY mandates that small or smaller bore rifles are better choices, per se, than larger and more powerful mediums and large bore rifles. I judge it’s rather a statement over age diminishing abilities rather than enhancing them! In short: It’s a statement of inability to do what they formerly could do with powerful magnums! That is completely understandable. But to claim that a .223 or .243, or a .30-30 can now do what they used to do with a .”338 magnum”, as one example, without telling the whole truth, is sheer deception in my view.

Sure, even I could manage to kill a bull moose at 25 – 30 yards with a hit to the brain or spine using a .30-30, or even a .243! That would likely get it on the ground where it could be finished with a single shot or three more! But in the many seasons of hunting moose, I only saw one bull that was legal, and that was at 165 yards which was cleanly taken without drama by my .340 Wby. Sure (again), it could have been ultimately killed using a 7-08 with appropriate bullets… but of this I’m certain: It would have taken several hits through the lungs on a running moose after getting hit with the first… unless that moose were much closer and I made a mistake in hitting its CNS!

There was another season, spring season, when I was bear hunting over bait when a big bull showed up about 35 yards behind me as I was seated behind a deadfall watching a bear bait in the opposite direction. I was toting my 1895 Marlin with stiff handloads of a 400gr at ~ 2100 fps. I turned and looked over my shoulder, “for no reason”, and there he was, a mature bull with huge antlers, staring at me. I stood, facing him without any fear whatsoever, and shouted “Get of of here!” I’d been far less courageous if toting a .243 Win, or even a 7-08 Rem! The bull was facing me! It turned slowly and walked to a ridge about fifty yards away, started to climb and halfway up stopped and looked back at me. I raised the Marlin in .45-70, pointed it in his direction and he took off over the ridge like a bulldozer knocking over trees as though they weren’t there! He was intimidated… I wonder why? Well, I faced him down without fear and he recognised that! That happened – facing him down – due to my full confidence in my use of that .45-70. I’d have been FAR LESS confident had that rifle been a bolt-action repeater chambered in anything less than a .338 Win Mag!

That bull was about 1200 lbs of raw muscle and bone, and had me in his sights and resented my presence! That was obvious. This was his territory. Had he charged, I’d have fired straight into its chest. That 400gr at an impact of at least 2000 fps, which was not a too-soft Speer, but with a 0.35″ jacket and minimum lead exposed would have stopped the bull, and perhaps finished it on the spot. Out of season? Yes! But personal safety trumps legal seasons, even in court! And I didn’t have an outfitter or guide present to back me up… I was my own guide in that critical situation. 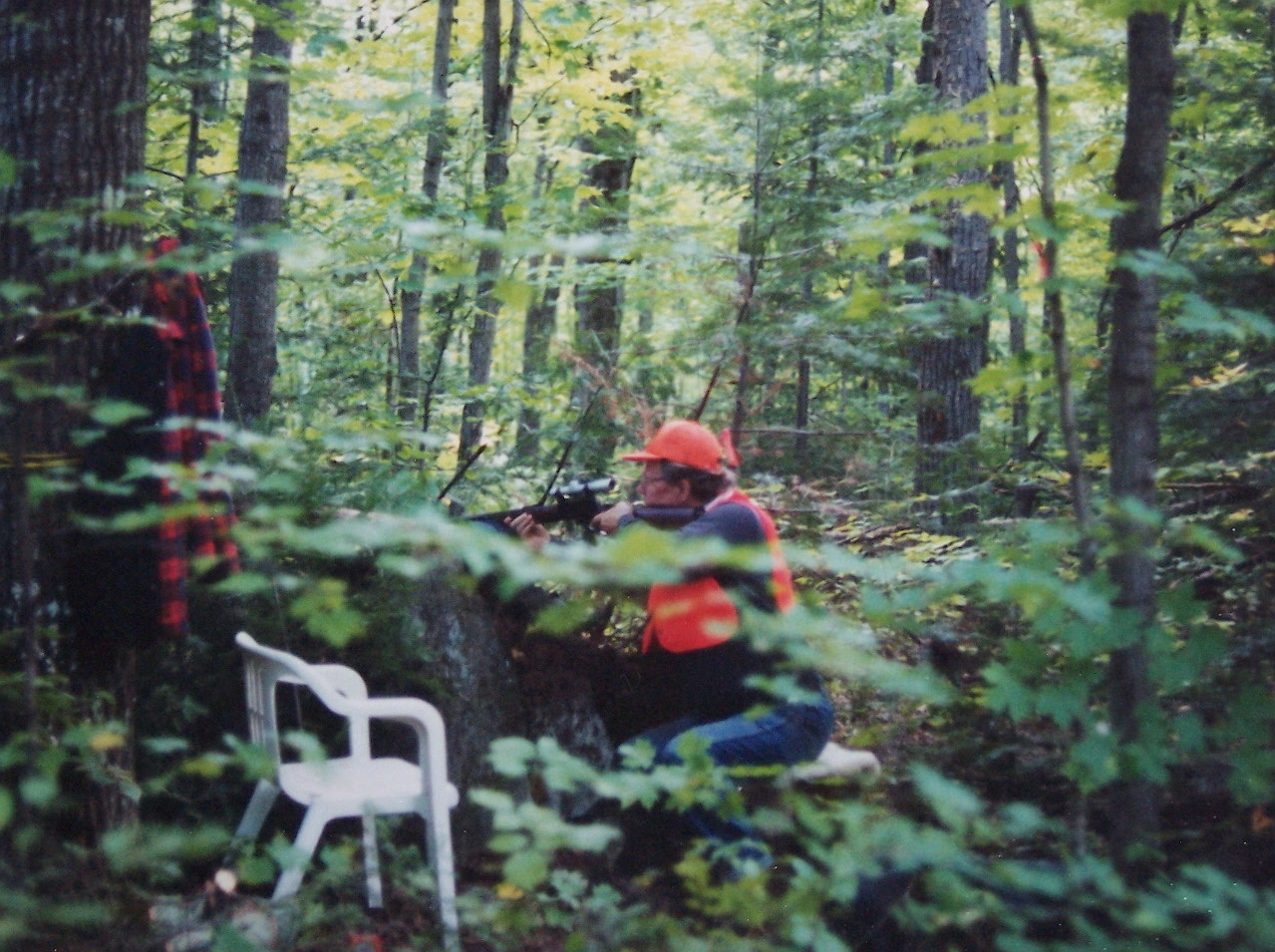 On May 1st (Sunday), of the past week, I put in a bear bait in a new area. Moose had travelled through there last Fall, so I kept watch for any sign of them. One was a big bull and also signs of a cow and calf. A cow with a calf is potentially very dangerous! I toted my new .35 Whelen loaded with 225gr Nosler Partitions at around 2770 fps/3833 ft-lbs, sighted dead on at 100 yards. It would have been illegal to tote a loaded firearm out of season, but I had a bear tag because May 1st was the opener. For confidence? Yes! That rifle – a single-shot – is relatively light, short and handy. And the new scope is bright, clear and sharp. It was kept on 2X which was plenty for the immediate area of my work. 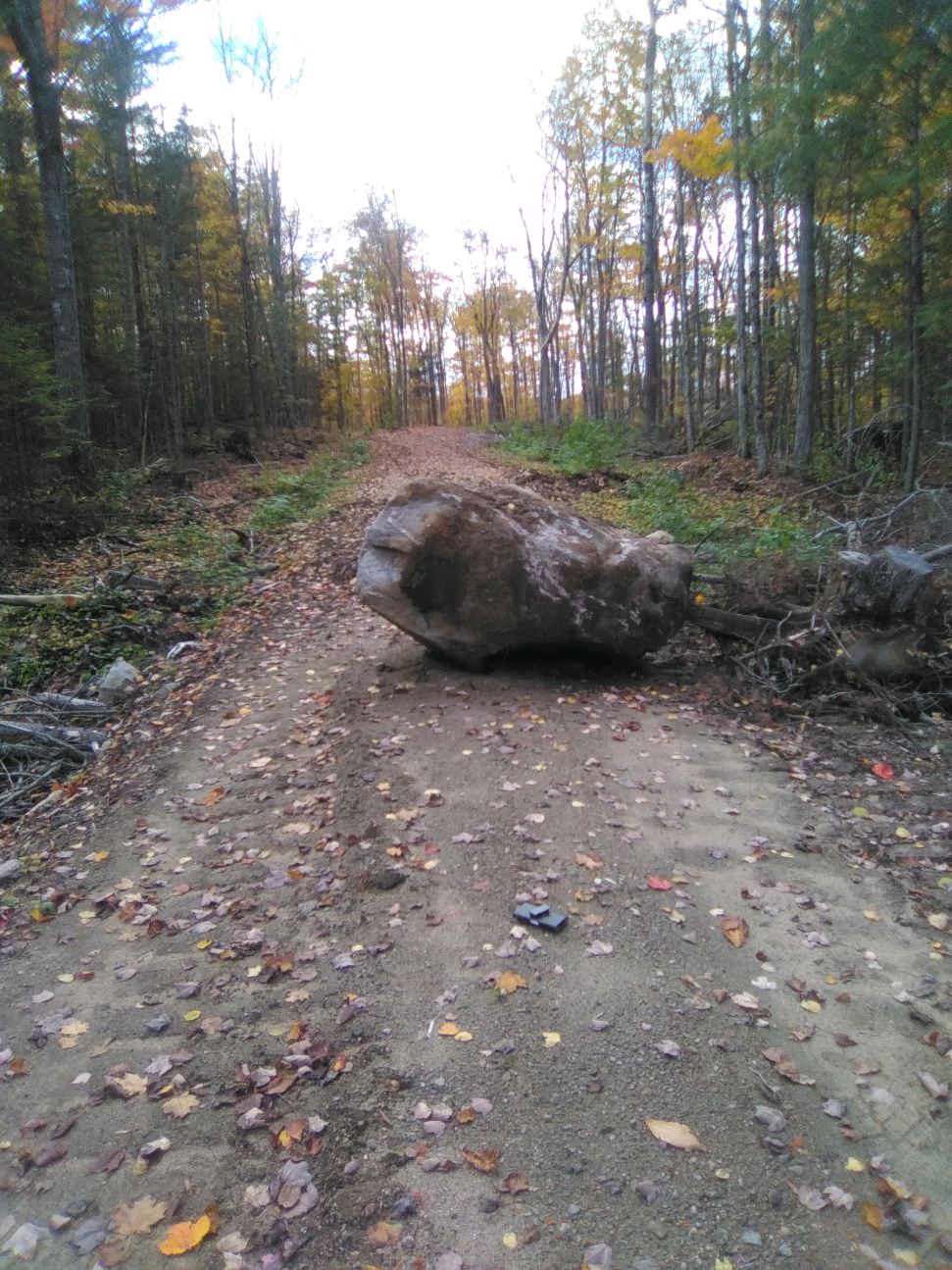 <This pic was taken in early October, 2021, and in the recently logged out area of my planned bear hunt. The bait has been placed at the far end and about 80 yards to the right of the those trees at the end in a pile of logs .

Let’s compare a .243’s ballistics with my current new load for the .35 Whelen, which weighs no more than an average .243 Win in a bolt-action repeater at 7.25 lbs with scope and ammo. And, I’d NEVER replace the .35 Whelen with a .243 Win due to its recoil being twice that of the .243! The recoil I experienced at the range in shooting three 225 AccuBonds at a 50 yard target from an offhand stance wasn’t a surprise, I’d experienced that and more over many years – 38 ft-lbs, less whatever effect the brake has… probably -7 ft-lbs.

The point: Is NOT to put the excellent .243 Winchester in a bad light in comparison with cartridges intended for large and dangerous game, but to show it was NEVER INTENDED to be a cartridge for such game, while being excellent within its INTENDED purposes – varmints, small game and some medium game like whitetailed deer.

The .35 Whelen, on the other hand was created to excel in use on the largest of North American big game, including Alaskan moose and brown bear. And due to excellent big game bullets from 180gr to 310gr, it can also be appropriate for predators, hogs and whitetails. Then with pistol bullets, it doesn’t make a bad varmint cartridge either. My purpose for it is as a general purpose walk-about rifle for scouting and come what may. The .243, as good as it is, can’t play that game. “Come what may” for me means: any creature – small to large – under any and all conditions. And the .35 Whelen is not alone in that genre, but it is one of the best.

Til the next… Best results from my .35 Whelen in handloading components.