What is a BIG-BORE Rifle?

Posted by bigborefan on January 9, 2021
Posted in: Uncategorized. Leave a comment

Yes, of course you’re right, I’ve previously written on this — in fact, a few times. But since the featured attraction of this site has to do with BIG BORES, why not again?

Actually, there are three main reasons for so doing:

So lets get started:

CONFUSION: “A failure to distinguish between things” -Webster. I think that’s an apt description of the situation. But it’s not entirely the fault of rifle shooters and hunters, oh no…. Manufacturers of rifles and their marketing branches must share the blame because Winchester, as one example, has designated some of their larger bore M94 lever-actions as “Big Bore”. So we have a situation where some shooters go online talking of their “big bore” .375 Winchester. There have actually been some readers and listeners who think that’s some kind of .375 H&H! I’m not kidding you!

ARBITRARY DESIGNATION: Then, there is at least one prominent owner of an Internet forum, who spends a lot of time in African Safaris, and also builds his own rifles and bullets, that lists his favorite cartridge as a BIG BORE under that section of his forums. It’s a .375 caliber nearly identical to the .375 RUM. Because he claims it will do whatever the BIG Bores can do in the field, he arbitrarily includes the .375 H&H or anything in that caliber suitable for African DG under the heading of BIG BORES. Of course, he’s the owner of the forum, so he can do as it pleases him… but I’m not constrained to agree.

Of course, my writings here are described as “a blog about big bores”, but I make distinctions in classes of rifles as I write. I have never considered ANY .375-caliber as a ‘Big Bore”. In my view, and that of historical writers, a true BIG BORE has two main features: 1) Size of hole in the bore (caliber), and 2) a minimum level of kinetic energy at the muzzle. Sure, the .378 Weatherby (actually a .375 caliber, but that was to distinguish it from their previous .375 Weatherby, having a much larger case for powder with the consequent increase in “power”) is capable of about 6000 ft-lbs at the muzzle from a 300gr bullet which matches some of the true BIG BORES in energy but NOT in momentum or cross-section area of the bullet that has ALWAYS been a very significant factor in the slaying of elephant, for example. Kinetic energy (KE) isn’t the MAIN factor in the killing of large or dangerous beasts — I believe that is generally understood in today’s hunting world. But there’s no denying that large bores shooting heavy-for-caliber, well constructed bullets, have a terminal effect on live game that surpasses predictions based on KE alone.

The .375 RUM isn’t far behind the .378 Weatherby in KE, and it’s based on the .404 Jeffery, same as the wildcat used by the owner of the forum previously mentioned. But even the .375 RUM has not been regarded in the media as a true BIG BORE. Plus, there has been at least one .375-caliber wildcat that made well over 5000 ft-lbs at the muzzle, and preceded the Weatherbys and the RUM. The .375 Barnes Supreme was based on a full length magnum case with a sharp shoulder to fire the Barnes 350gr at 2650 fps (5457 ft-lbs KE.), and was never regarded as a BIG BORE.

I’ve suggested .40-caliber and 4000 ft-lbs of kinetic energy at the muzzle as a starting point for BIG BORES, and that was the result of considerable research on the matter. So I’ll stick with it even though I know at one time even .40 calibers were called “small bores”…

DENIAL: If some idea, concept or statement is repeated often enough, in the media in particular, it eventually gains credence (like “fake news”). A well known Physics Professor won the Nobel Prize. In his acceptance speech he said something that rocked his audience. He declared that the common idea that you could get something from nothing “quickly” was entirely wrong! To get “something from nothing takes a looooong time”, he said! You have to be patient! Of course, that’s NOT science, but it ‘s evolutionary theory! 0+0=0, 0x0=0, 0/0=0, 0-0=0. Nothing + time = nothing, EVERY TIME!

<The Andromeda Galaxy, the closest galaxy to ours, the Milky Way Galaxy, of approximately the same size at over 2,000,000 light years from us. It has billions of stars and is one among billions of galaxies. A mere accident? (Image courtesy of a friend.)

Why is it that humans would rather believe fiction than TRUTH? True science says that for every EFFECT there IS a CAUSE! Creation IS an EFFECT! What or WHO is it’s cause? An infinitely small speck of energy (“singularity”) that’s too small to be seen or measured, resting for all eternity in “equilibrium” that decided to “blow up” one afternoon, 16,000,000,000 years ago, without reason or purpose, ultimately making all that exists in the universe, including intelligent life — does that really make sense? And I’m considered “not with it” because I believe the CAUSE is an ETERNAL CREATOR with limitless power, intelligence and personality.

The above example of DENIAL is the most vivid demonstration of “fake news” and believing “the lie” in the whole universe!

And “denial” of what a BIG BORE is and does, matters? Not in a larger or eternal scheme of things, but it is a very minor irritant when universal thinking shifts in favor of smaller bores as the answer… for what did you say? I think that “shift” is a revelation of a couple of things:

ONE: In a sophisticated digital world, men are becoming, or have become softies! And TWO: We are afraid of getting hurt, or experiencing pain, so we protect ourselves! One way is in choosing the right “gear”, including rifles that won’t “hurt us”. Last evening I addressed the issue of “recoil” on a forum. Some very good points were made by others except for a couple of areas which I touched on. But as a conclusion I mentioned my current age of 85, and had handloaded most common cartridges from the .22 Hornet to the .458 Win Mag, and had NEVER been hurt (damaged) by recoil, but I have significant hearing loss from muzzle blast, and that NOT from BIG BORES only! Muzzle blast is mostly the result of the PSI of escaping gases at the muzzle, which can be as much or more from a .243 Win as from a .458 Win! Please notice that I said “PSI” at the muzzle, not amount of gas. 11,000 psi at the muzzle is the same whether from a small bore or big bore. I defy anyone to tell the difference whether from a .243 or .458 from a mile away in thick forest.

<Notice the distance from the scope (it had a very good eye-relief of 5.5″); holding down on the forearm; pulling into the shoulder; the PAST magnum protector; the muffs and elbow protection — these are all important for lessening the effects of felt recoil from a BIG BORE.

There are many ways to mitigate the effects of recoil, and one of the most significant is a heavier rifle, which due to poor physical fitness we don’t want to deal with. May I mention what I suggested on that forum? Yes, of course: My favorite rifle is a Ruger No.1 in .458 Winchester Magnum. Prior to that it was a Ruger No.1 in .45-70 LT (LT = long throat) that could produce ballistics equivalent to a 22″ barrelled .458 Win Mag. — a 500gr Hornady at 2200 fps for example. That rifle weighed 8 lbs with a scope on board, and 8.4 with some ammo attached. It was my “favorite” rifle for twenty years! Did I say that? Yes I did. Two + years ago it got traded for the Ruger No.1 in .458 Win Mag. Why? Better ballistics? No, but because I wanted more weight in a similar rifle with the approximate same ballistics. That’s it — two pounds more weight meant a reduction of about 30% to 40% for equivalent loads!

Then, there are other ways to deal with a BIG BORES’ recoil: Reduced loads! In fact, I mentioned on that forum that my current .458 Win Mag has a variety of hunting loads I’ve developed for it that produces recoil anywhere between 27 ft-lbs all the way to 50 ft-lbs, if needed or wanted! That last number of 50 ft-lbs was 72 ft-lbs in my Ruger No.1 in .45-70 LT from a 500gr at 2210 fps/5422 ft-lbs (Actually, the average weight of those 500gr Hornardys was 503 grains, making the recoil slightly more as well as the KE at 5454 ft-lbs.) At the range I deal with the recoil this way: Posture – sitting up straight, and not more than 10 rounds per session (I bring other rifles along with less recoil, including a .22LR); a PAST magnum recoil pad over a folded-up terry-cloth towel, plus jacket makes 50 ft-lbs of recoil energy tolerable. Both ear plugs AND muffs employed in concert dampens blast to a “pop”. LOUD muzzle blast enhances the sense of “felt” recoil.

< This was my CZ 550 in .458 Win Mag that weighed 11.2 lbs ready. Notice it’s slung over my left shoulder. From there it was very easy and fast to get it into action. I shoot from my left side.

How do I deal with the extra 2 lbs weight of the No.1 Ruger in .458? A sling in walking about, on either shoulder (the same shoulder doesn’t need to be used under all conditions); port arms; cradle; hand carry, switching from one hand to the other; shotgun type carry. Of course, if I’m aware of a possible confrontation with a bear, I’ll be carrying a rifle in a ready position. Taking a break in sitting – especially where game might show up is also an option. In a blind I’m mostly sitting with the rifle leaning against something — but it never goes into a tree stand. I really don’t find much advantage to a light rifle over a heavy one. They both have advantages and disadvantages, the same as a short barrel verses a long barrel. But the No.1 Ruger with a 24″ barrel is only 40″ in overall length due to no magazine in the action. In that sense It’s almost a carbine! A so-called “heavy” rifle might be a tad slower in swinging or raising into action, but it’s more steady when it gets there than a rifle that weighs 6.5 lbs. It also handles recoil better, and stays on track for a second shot much better than an 8 lb .458 WM, for example.

Several hunters/shooters are in DENIAL over the use of BIG BORES, using the excuses of RECOIL and WEIGHT, when the real issue is lying to themselves about their physical and mental conditioning!

But the last argument that appears so convincing is that lesser cartridges and smaller bores will do today what was, perhaps, necessary in days of yore. Really? 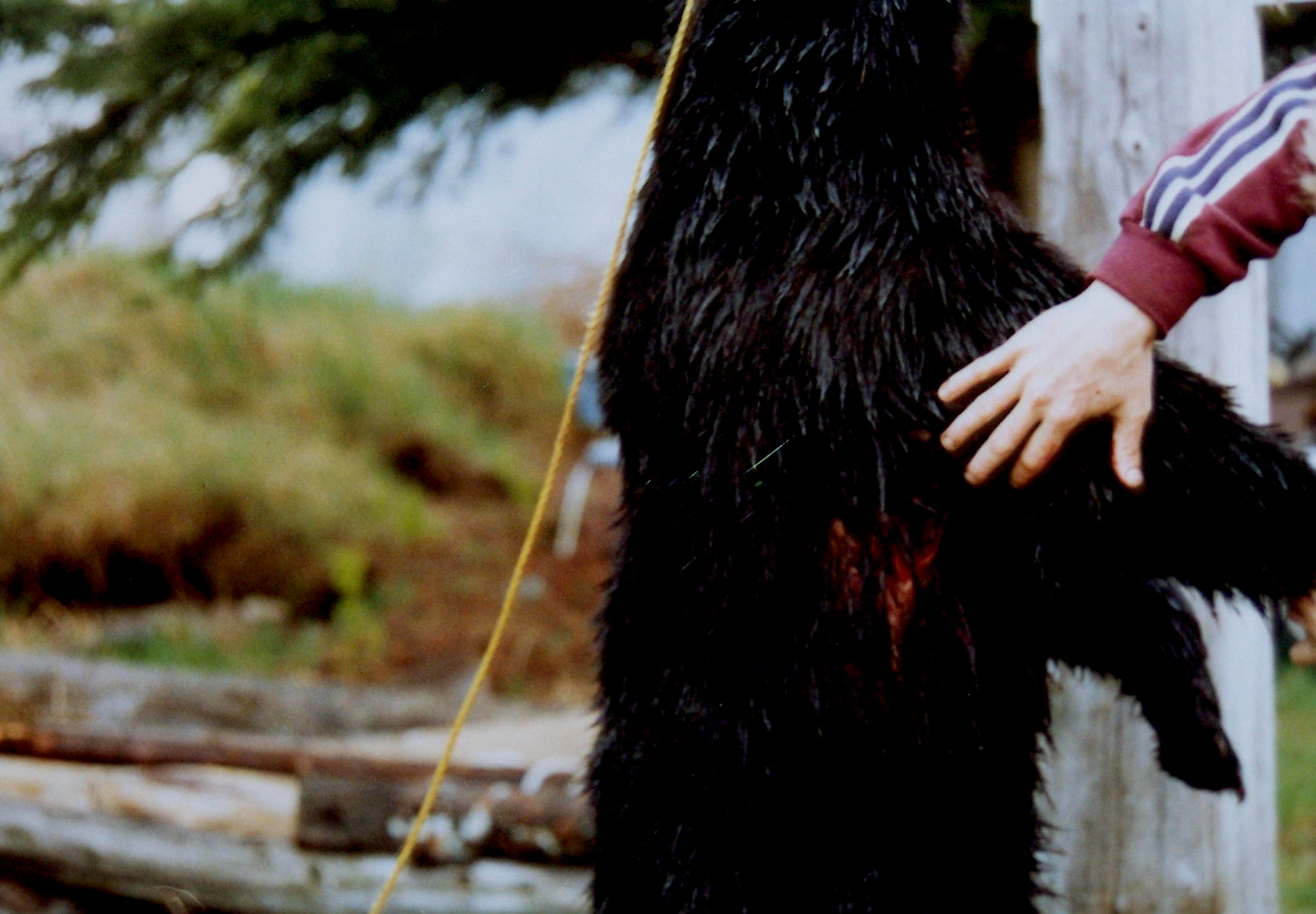 My experience on black bears over the past three decades is convincing enough to cause me to say that the most effective caliber has been in .458″, which includes both .45-70s and .458 Win Mags. Lesser calibers and cartridges will certainly KILL bears, but they won’t necessarily STOP bears in a close confrontation unless the brain is hit or spinal cord severely damaged. I know that from experience.

And they too have profited from our “sophisticated digital world”!