<The 400-gr Hawk is 2nd from left in this pic. Left click on the pic for a much more detailed view.

All had been tested at the same pressure for hardness in a vise. The toughest was no.1, a 400-gr Colorado Custom (formerly Barnes – then later sold back to Barnes) with a .049″ Jacket, RN with minimal lead exposed. Unfortunately, I used them all up (50) in testing. So no game was shot with that one. They were old stock in a gun shop I used to visit. A co-owner of that shop was murdered when gangsters burst in to rob the store of handguns. The co-owner resisted and was shot dead in cold blood on the spot. He was well known to me. Years later, his oldest son was part owner and the shop was moved to a new location. I walked in one day browsing for anything in .458-cal. As I came to the checkout the son was there and recognized me. He said: “I’ve got some bullets that I’ve reserved for you.” He left the checkout for a couple minutes and then returned with a box of 400-gr Colorado Custom bullets. I was about to pay him when he said they were a gift! The current 400-gr Barnes FP is a travesty compared to that perfect bullet for either a .45-70 or .458 Winchester Magnum in hunting large game.

As mentioned in P3, my 1895 Marlin Classic with a 22″ barrel was loaded with the 400-gr Hawk at 2100 fps/3916 ft-lbs at the muzzle. That was the load and rifle in the followup of the wounded bruin into thick underbrush in mid-May, 1996. At 7 am of the following day of the hunt, myself with two friends were on site in the followup.

I circled the thick bush at the bottom of the ridge and came through the “back door”. My two buddies were at the “front door” should he try to leave in that direction.

My thought process which dictated the plan of action and emotions began immediately following the escape of the bear into the darkness the previous evening at about 8 pm. Actually, earlier. In preparing for a bear hunt, all possibilities are carefully planned for, including a wounded bear at closing light. But when approaching the “back door” I had prepared myself for a potential charge at very close quarters — that’s why I told my friends to “stay put”. It was my bear, not theirs, so my responsibility. I wasn’t afraid, but prepared mentally for “whatever”. I entered the thick enclosure and before me was a “room”, a grass covered space about 12′ x 8′, and off to one side was matted-down grass with an eight inch patch of blood, and pin-pricks of blood leading out the “back door” where I’d entered. The bear had fled literally seconds before we arrived. 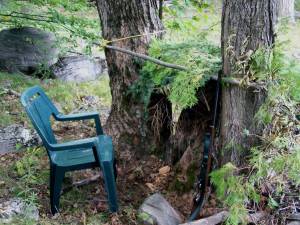 Not minutes before, but when we got too close and he felt outnumbered, he  left for the top of the ridge. We did a followup for the rest of the day and went where I expected, across the dirt road on the other side of the ridge and back into the interminable tree-filler swamp on the far side — from which I knew he’d come to my bait. That’s where they all came from. We lost him in there and couldn’t continue. He stayed just out of sight — about 50 yards ahead of us.

How did I know that? There are ways. But I left my friends and cut ahead to the dirt road looking for any signs of the big bruin having crossed it — there were none. On the far side of the ridge, at the bottom was a stream, he’d crossed it (paw prints in the soft edges of the stream), then crossed the newly graded road leaving clear paw prints, then over some bare rocks with pin-points of blood, and descended into the forbidden swamp. He survived! But for how long?

A day later and alone, I was at the site of bullet impact to discover why the bullet didn’t hit where aimed. In the flight of that 200-gr X-Bullet, it had clipped off a hardwood sapling, over an inch thick, a little past 60 yards. These saplings are scattered throughout the region and grow very tall. It didn’t appear in my scope that was struggling even to show cross-hairs against the bruins black fur.

< The top of that ridge to show how thick and dense the forest is at that location in the spring before the foliage has developed in early April. You can see some of those small hardwood saplings. Left click for an enlarged view.

But did that bruin return 5 months later after his initial fright? More than a “maybe”…

Five months later, my friend Mike who had assisted in the spring followup, asked if he could hunt the same bait site during the fall season. Since I had filled my tag with a much smaller bear in the spring at that site, I agreed, and did the baiting protocol and was nearby to lend a hand if he shot a bear. Also, the moose season was coming up in about a week and I was interested in harvesting a calf. So on the first afternoon/evening of Mike’s bear hunt, we travelled in separate vehicles and I went off in another direction – about 3 kilometres – to look for moose sign. I also did some calling hoping for a response that would indicate moose were in the area for the upcoming season. Of course, I was without a rifle since I’d already filled my bear tag. 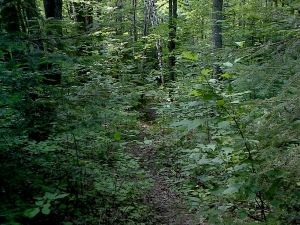 <The trail to the bait setup which I used in baiting as well as being a game trail, especially for bears.

Less than an hour went by from when I’d left Mike at the bear bait site when I heard a clear shot from about 1 and a-half miles away. It was from the right direction so I knew Mike had fired at a bear. Quickly, I climbed up from a stream about 150 yards to where my van was parked, and drove to where Mike’s vehicle was parked just in time to meet him coming from the trail that led to the bait site. He said “Yes, I fired at a bear but haven’t located it yet”. He returned with me to the site about 200 yards away, downhill from the side of the ridge, all the time describing what happened. The bear ran past the bait barrel, but picked up a honey filter from a branch and dove back  into the thick woods without stopping. A few minutes went by and the bear performed the same feat and Mike fired his .338 Win Mag loaded with the 210-gr Nosler Partition at 3000 fps just as the bear was disappearing again. So he never looked for it alone. Our agreement was to not look for a wounded bear alone! He was unsure of its direction after the shot, and didn’t know the country as I did. So I immediately looked where I thought it might be if dead.  Sure enough, I found it dead about 40 yards behind the bait barrel as the ground continued to slope downhill toward the bog, about 35 yards from escaping thereto. The first thing I saw was it’s head peaking over the hill towards me. It was a big head! And it’s body was complementary. I called Mike: “Over here Mike, I’ve found it — it’s a good bear!”.

It had a large frame but was thin for a fall bear. In field dressing, we found a strange wound in a strange place! I would estimate the bear to weigh nearly 300 lbs as it was. When properly fed and healthy, it should have gone over 400 lbs! There are three reasons for thinking this was “my bear” that had been wounded in the spring: The strange wound, its unhealthy weight, and it’s nervousness in running past the bait in two tries of catching a morsel in its teeth.

That experience highlites this adage, I think by John Wootters: “A missed shot or wounding a deer will result in the animal leaving the country, but the same thing in a bear hunt will often result in the bear returning to steal your lunch!” 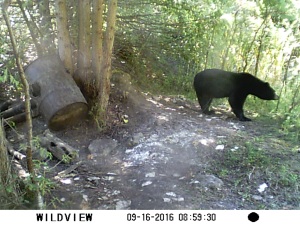 After Mike’s experience in the spring hunt, he decide to load up his .338 WIN MAG for the fall hunt… just in case.

And, “just in case”, don’t skimp on caliber or bullet selection while in bear country!