Proposition #2: Today’s premium bullets are promoted as better than yesterday’s standard bullets for most hunting. This appears to be believed by a majority of hunters after medium and big game. Even some varmint and predator hunters of coyote, lynx and bobcat purchase ammo, or handload their own, using the “best” bullets on the market with hope of greater success. Is such confidence in media hype warranted, or is it just unnecessary expenditure?

In this article, I will endeavour to uncover some truths and some fallacies. There are concrete cases in point  for each position. And I’m not void of experience on either side of the issue.

Without jumping to conclusions too quickly, we can, nonetheless, learn something from every personal experience we may have had in shooting anything from a crow to a bull elephant. And I would add to those instances any others where we have been first-hand witnesses and observers of friends, neighbors, strangers and family members taking the life of a living creature, small or large. That could be in using a handgun, slug from a shotgun or muzzle loader, and/or a bullet from a rifle — small, medium or large bore. That covers a lot of territory, and most hunting throughout the world. 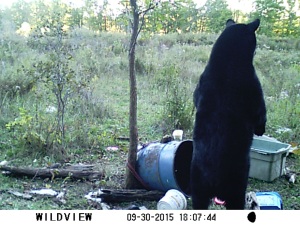 While my personal hunting has been limited, in relative terms, to a small patch of the North American Continent, and a short stint on African soil, still I believe that anything from a pellet pistol used on pests to a .458 Winchester Magnum on big game has given enough insights on what works best in a majority of situations, and what doesn’t work as well (or not at all) in others. Some examples will be offered both from personal experience as well as from that of others.

I’ve been a very committed handloader since 1981. That is, I’ve not used factory ammo in any of my centerfire rifles since that date, with one very brief exception only. And that was on a whitetail hunt using .35 Whelen factory fodder while waiting for my dies to arrive so I could commence handloading for that rifle. Prior to 1981 I bought ammo for my 12ga and any rifles. Today, of course, I still purchase 12ga slugs, pellets in .17 cal. and .22 LR. Any other shooting is only of that which I’ve put together from reloading components, including bullets. And this theme is uniquely about bullets.

There are manufacturers of bullets represented on my shelves by boxes with these names: Speer, Sierra, Hornady, Nosler and Barnes. Then there are quite a few cast bullets in both .358″ and .458″. The .358 bullets are for my son’s .356 Winchester M94 XTR lever-action. That’s in my cabinet too, and I’ve put handloads together for it with varmints, deer, bear and moose in mind — not excluding “standard” cup-n-core projectiles. It’s a great number for all of those critters with range kept in mind. .35-caliber is, in my mind, one of the best for anything N.A. offers in hunting. I’ve owned several of my own in .350 Rem Mag and .35 Whelen.

Also, I put together loads for a friend’s .308 Winchester, and helped another friend develop loads for his .375 Winchester. So, I’ve learned some things from all of it, and have some definite views on hunting bullets and handloads for hunting purposes. And some of it is unique and against conventional wisdom. As one example of that, I’m not in favor of “premium bullets” for all hunting situations of medium and big game. They aren’t needed. Or, they may be the wrong choice due to being too tough, with too much emphasis on penetration. And, especially is that true for varmint shooting, or game less than 100 lbs.

That includes ALL of them! However, most of it is “copy catting”, meaning there is NO NEED for a half-dozen (or more) companies making basically the same product while claiming it is “superior” to all others! It is fear driven– that is fear of losing product “share”. I understand that a company must compete with the best “out there”, not only to stay in business but to hopefully expand their products in other ways including new and better products, but merely to produce the same as others lacks innovation and real progress. Then banking on a gullible shooting public, while charging exorbitant prices! To be blunt — I have NO NEED to buy bullets that cost $2 to $4 each to shoot a moose, or a bear, etc.! Nor do you! Nor even a box of twenty loaded cartridges that go from $35 (for “standard”) to $65 (for “premium”). In that light, hunting is fast becoming a game for the elite only, much like it has already become in England and The Continent. I don’t want to be identified with that. That bubble is going to burst sooner or later, and many companies are going to fall by the wayside as fewer youth will enter the sport, in part due to exorbitant costs! Mark my words, as in the housing market, few young domestic couples can now afford mortgages in the range of $3000 to $4000 monthly in addition to escalation of transportation costs, elevated food costs, and other expectations involved in “the American Dream”!

Secondly: In many cases PREMIUM bullets are not needed, and in others they may become a liability! What is meant by that? Up front, let me say that I too have my bullet preferences for particular hunts. Sometimes they involve “premiums”, at others I consider them a waist of money or even a liability.

These two I have experience with and prefer them above all others in my 9.3 x 62. They are, of course, the 286gr Nosler Partition and the 250gr Nosler Accubond. 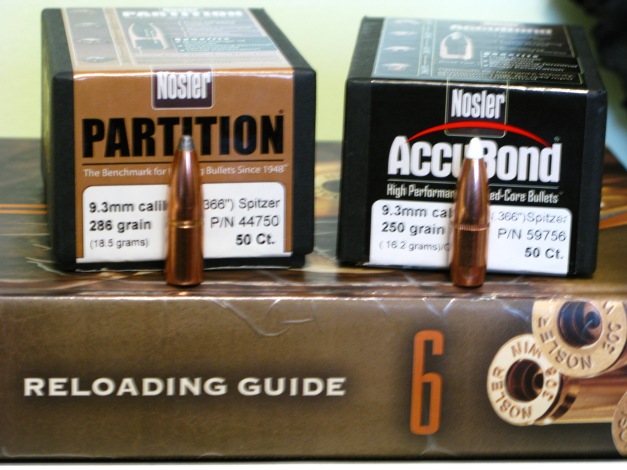 For example: a number of years ago (2009), I shot a three-year old bear frontally in the chest as it was unknowingly facing me from 95 yards, munching on some delicasies in front of the bait barrel. The rifle was my CZ550 in .458 Win Mag. “Not needed” you say? Of course. But I wanted to give it a try anyway since it was already loaded for a moose hunt. The bullet was the 350gr TSX in .458″, leaving the muzzle at 2750 fps. Impact would have been in the neighborhood of 2450 fps (4665 ft-lbs) and should flatten said bear on the spot, right? Well, while the whole thing was being videoed by a friend, the bear took the shot without “blinking an eye”, took off on a dead run in a semi-circle that extended to about 75 yards, ending with a dead bear about forty yards behind the bait — in darkness when we found him. Any other bear that I’ve killed with any other bullet from any rifle has never gone more than twenty yards total! Yeah, there was complete penetration from frontal chest (under chin) to right flank just in front of right hip. The exit wound was about dime size. My conclusion was then, and still is, that the 350 TSX NEVER expanded! It might be a good, or even “awesome”, bullet for a large moose or cape buffalo, but it failed in performance as to expectations compared to a “cheap” Remington 405gr. I killed a bear of similar size at the same location, a few years earlier, shooting a 405gr Remington from my .45-70 Classic at an MV of 2100 fps. Impact would have been around 1800 fps (2900 ft-lbs), and that bear was literally flattened on the spot and the bullet was NEVER RETRIEVED as it made exit just behind the right shoulder after taking a hit in the short ribs of the left side in a going-away presentation. The Remington bullets were bought in bulk at about 20 cents per!

Conclusion: Let me say this, the 350gr TSX was not at fault in that situation, but it was not a “best” choice, nor even a good one! I used it because they were a load put together for a moose hunt and I wanted to “see” how they would perform on a bear…. I found out! The problem was that BARNES only gave loading data in their #4 for the Ruger No.1 in .45-70! And the best they did in their tests was 2139 fps from the Ruger — which was some kind of joke, I think. Or ignorance over what that weight and design of a TSX would FAIL to do! The IMPRESSION given by the manual #4 was that it was designed for the Ruger AND would perform as expected on big game, EVEN at the slow muzzle velocity of 2139. It didn’t even expand at 2450 fps on a three-year old bear!

Note to BARNES: test your bullets in real life scenarios BEFORE promotion! The larger TSX’s in Big Bores are notoriously tough, and should be promoted for large, tough game, NOT for soft-skinned deer or bear! Good bullet, but poor promotion! I was told by a Barnes’ rep that they would expand down to 1600 fps at impact on animal flesh! 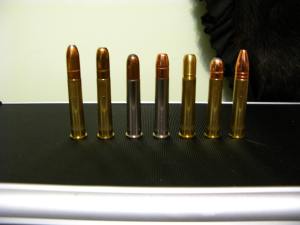 More to come in our next presentation.